Opening of the UK economy

The coronavirus pandemic has had a devasting impact on the UK economy, its businesses and the health of its people. We know that freelancers have been hit particularly hard by the financial effects of the pandemic due to limited government support, as well as a reduction in work leading to significant financial losses.1

At the end of February 2021, the government announced its four-step roadmap out of the third national lockdown in England. The first phase of the roadmap was introduced in March with the re-opening of schools, colleges and childcare services across England. In this stage it was also announced that people could leave home for recreation and exercise outdoors with their household or support bubble, if they are eligible for one, or with one person from outside their household. Later on in March people were able to meet outdoors with up to six people or two households and outdoor sports facilities were able to re-open.

The second stage of the roadmap took place on 12 April 2021, allowing non-essential shops, indoor leisure facilities and outdoor attractions to re-open. At this stage, self-contained accommodation could accommodate guests once more and hospitality venues were able to serve people outdoors.

The government has now announced that due to the success of the vaccine and the continued reduction in infection rates, step three of the roadmap will go ahead as planned on 17 May 2021. This next step will allow up to six people to meet together indoors - or two households. Most businesses will also be allowed to open. This includes indoor hospitality, entertainment venues, hotels and indoor adult sports groups and exercise classes. Some larger events will also be able to take place although some restrictions on numbers will continue. The number of people allowed to attend private events such as weddings, receptions, wakes and funerals will also be increased to 30.2

With the government on track with its roadmap, we wanted to understand the impact the second stage had had on freelancers - as well as what they expect from the third stage, from 17 May. We also wanted to investigate what concerns freelancers have as the economy begins to re-open and how long they predict it may take for their businesses to return to pre-pandemic operation levels - if they haven’t already.

The impact of the roadmap out of lockdown

Looking towards the next stage of the roadmap and the further lifting of restrictions on 17 May revealed that almost a third (29%) were predicting this stage would have a positive impact on their businesses. The majority (64%), however, reported that they expected no difference in their business performance as a result of the third stage of lifting restrictions. Similar to the impact of the second stage of the roadmap, five per cent were actually predicting this next step would have a negative impact on their business.

A further three fifths (57%) revealed that they were still being impacted by the effects of the pandemic. Of these, only one in five (19%) expected their businesses to be operating at pre-pandemic levels within the next six months and just over one quarter (28%) expected it to take between six and 12 months. A further 40 per cent predicted it would take over a year to return their businesses to pre-pandemic levels and the remaining 14 per cent were unsure how long it would take.

From today, how long do you expect it will take for your freelance business to return to pre-pandemic levels? 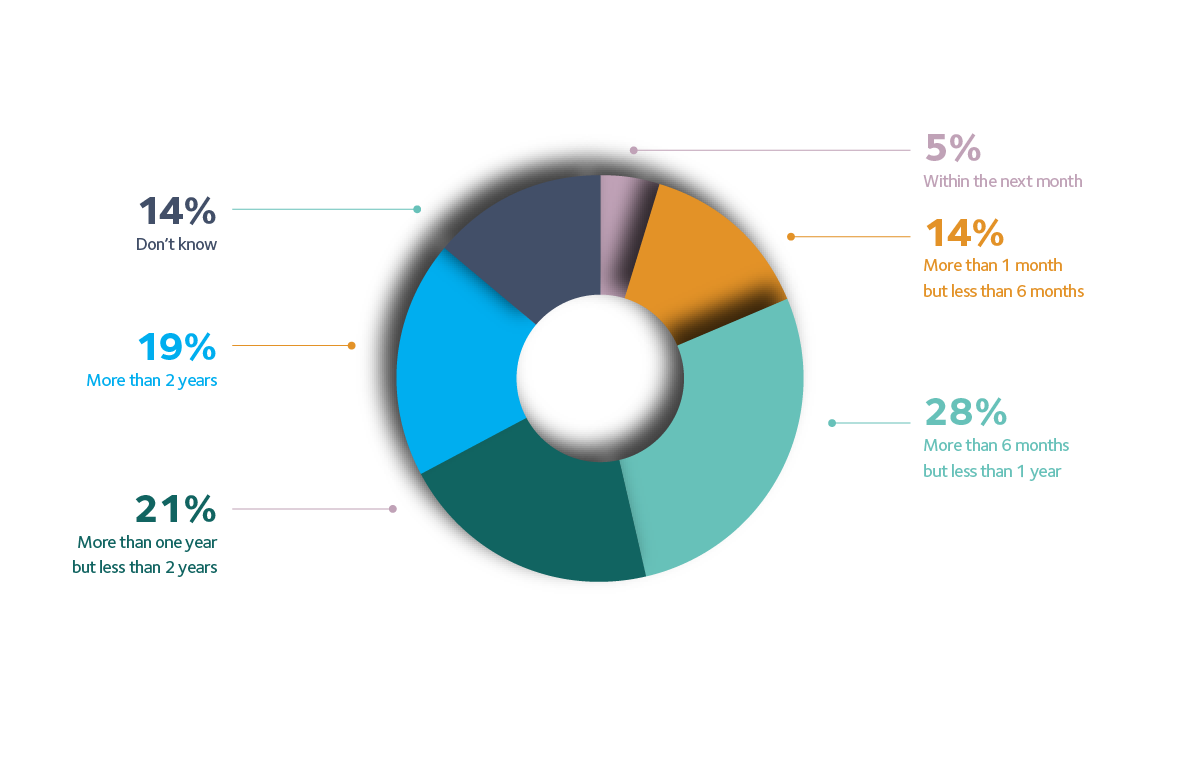 Note: this graph displays data only for those whose businesses were still being negatively impacted by the pandemic

Concerns about the future

Concerns about the future

Freelancers had a number of concerns as the UK economy begins to open up, with only four per cent stating that they did not have any. Most notably, four fifths (79%) were concerned about the impact of IR35 on their freelance businesses. The changes to IR35 legislation that came into force in early April 2021 mean that the end client now has the responsibility for determining IR35 status, not the freelancer or contractor. This has led many organisations to enforce ‘blanket’ IR35 assessments or to stop hiring contractors altogether,3 and is already having a big impact on the self-employed sector. In fact, freelancers now report that government regulations in relation to hiring are the top factor negatively impacting business performance - above the coronavirus pandemic.4

Half of freelancers (51%) were also worried about finding work or clients; over a third (37%) were worried about reduced demand for their services and one in five (21%) expected an increase in competition from other freelancers.

Freelancers also had a number of health concerns about the UK economy opening up, including over a third (36%) who were worried about the possibility of a third wave in the UK, a quarter (24%) who were concerned about the health impact of having to commute to client premises and almost a fifth (17%) who were worried about the levels of on-site covid protection available. A further fifth (20%) also had concerns around stress or mental health as the economy begins to open up. We know from recent research that the pandemic has already taken its toll on the mental health of the self-employed, with a fifth (20%) stating that their mental health remains poor or very poor.5

Which of the following, if any, are you concerned about as the UK economy begins to open up? 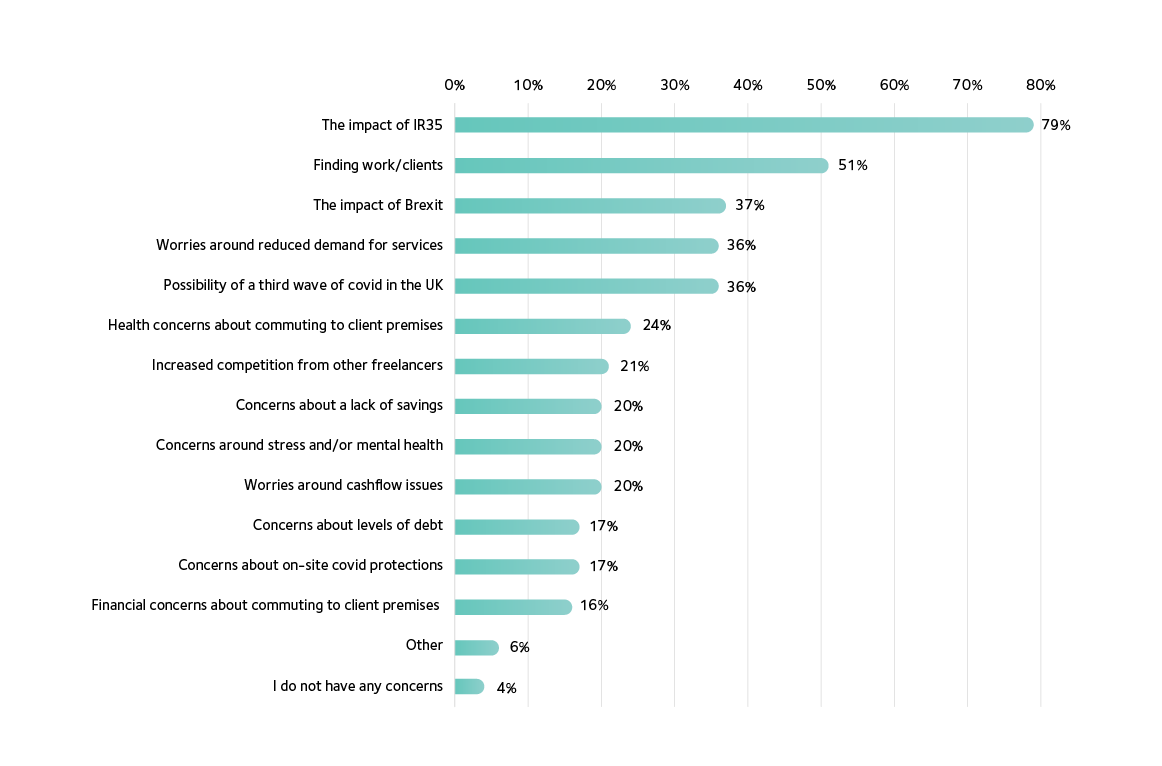 Note: Percentages do not add up to 100% because respondents were able to select multiple responses.

Other concerns revolved around financial issues, with a fifth (20%) worried about their lack of savings or having cashflow issues, almost a fifth (17%) concerned about their levels of debt and 16 per cent worried about the financial impact of having to commute to client premises. We know that many freelancers have been left with little or no support through the pandemic, most notably limited company directors, those new to self-employment and those earning above the £50,000 threshold. We also know that 27 per cent reported that in order to financially support themselves through the pandemic they have used up all or most of their savings, therefore it is unsurprising that these concerns exist as the economy begins to open up.6

A final key area that was concerning over a third (37%) of freelancers was the impact of Brexit. The Brexit withdrawal agreement fully came into effect on 1 January 2021, bringing with it border controls and changes to trading, education and movement. At this stage the UK was in full lockdown and, as previously discussed, had not yet fully lifted restrictions. Therefore, there remains a high level of uncertainty about Brexit and the full implications of the UK leaving the EU.

As the UK economy begins to open, it is clear that there is still some way to go for many freelancers before their businesses are able to return to pre-pandemic levels of operation. The lifting of restrictions on 12 April had some positive impact on freelance businesses. However, over three quarters (77%) reported that it had made no difference. Similarly, looking ahead to 17 May, almost a third of freelancers (29%) state that they are expecting a positive impact for their businesses as further restrictions are lifted: although the majority (64%), again, expect no difference.

Encouragingly, the results revealed that one in five (19%) freelance businesses had not been negatively impacted by the pandemic and a further quarter (24%) reported that, although their business had been affected, they were already operating at pre-pandemic levels. This, however, leaves almost three fifths (57%) of freelancers who continue to suffer the negative impacts of the pandemic. Of these, the majority expect there is still a long road ahead before their businesses are operating at pre-pandemic levels.

As we emerge from lockdown, freelancers are faced with a number of concerns as many of them seek to rebuild their businesses. Most notable are the concerns around the changes made to IR35 in April 2021, which continue to devastate the sector. Freelancers are also concerned about being able to find and secure work - and, in many cases, that the pandemic has left them without savings and in debt. The re-opening of the economy also brings with it health concerns about having to meet clients in person, commute on busy transport and contend with stress and mental health issues.

It is clear that while some freelancers are already operating at pre-pandemic levels, the majority are struggling to rebuild their businesses. With wide-ranging concerns and fears that their businesses may take months or years to recover, it is clear the sector needs more support from government to bounce back from the devasting impact of the pandemic.