Making self-employment work for everyone: IPSE at Labour Conference 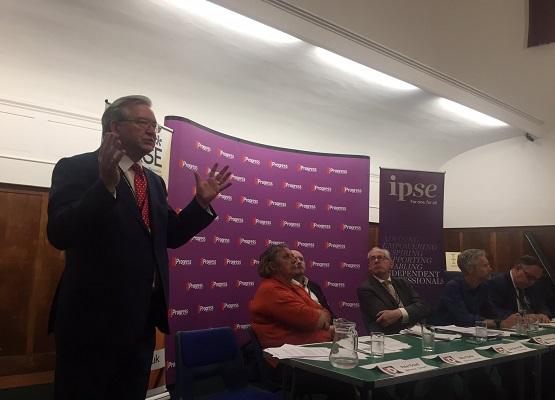 There were high spirits all round at the Labour Party Conference in Brighton this week. Boosted by the party’s post-election membership surge, the conference turned out to be Labour’s largest yet – with over 400 fringe events and an estimated 11,000 attendees. And with TfL’s decision not to renew Uber’s licence fresh in everyone’s minds, the changing nature of work was high up the agenda. Two issues people particularly focused on were the pros and cons of the gig economy and the impact of automation on jobs.

IPSE tackled both head-on at its joint fringe event with Progress, The Changing World of Work: How do we make sure modern employment practices benefit all involved? Bringing together panellists from the worlds of politics and academia, it addressed the question of how to make self-employment work for everyone.

The topic sparked lively debate about whether or not the gig economy is a positive development. Peter Dowd MP, Shadow Chief Secretary to the Treasury, kicked off the discussion by raising concerns about the rise of bogus self-employment. Regulating the sector, he argued, is “one of the great policy challenges of our time.”

Next Nita Clarke OBE, Director of the IPA, reminded the audience that most people working in the gig economy actually value the opportunity for flexible working. She went on to warn that policymakers must recognise the complexity of the gig economy and resist “lumping it all together in one and calling it a ‘bad thing’”.

Nigel Meager, Director of the Institute for Employment Studies, also cautioned against generalising. Elaborating, he disclosed some preliminary findings from an upcoming research project commissioned by the Centre for Research on Self-Employment (CRSE).The study, he said, had outlined nine distinct segments of the self-employed workforce, which it subdivided according to levels of earning, autonomy and precariousness. By demonstrating that the self-employed are an incredibly diverse group, the findings underscore the dangers of adopting a one-size-fits-all approach to the self-employed. Such different segments inevitably require different types of support from policymakers.

Liam Byrne MP, shadow Minister for Digital, reflected on the increased political significance of this sector, predicting that the next election cannot be won without the support of the self-employed. Then he moved on to the wider implications of the rapid changes in the world of work. Pensions, housing and social security are all being affected by the rise of self-employment, he argued, and we must “recast the welfare state in modern times.”

The panellists were united in their acknowledgment that public policy must adapt to address these new ways of working. While pointing out that the gig economy is just a small fraction of the self-employed community, Simon McVicker, IPSE’s Director of Policy, also urged politicians to “consult widely on this whole issue”. “They need,” he argued, “to listen to what they are being told rather than act on their prejudices.” In particular, he pointed out that “the top thing people want is a pension, but they cannot afford to save for one”.

With practical policy proposals, including tax deductible training for the self-employed and a lifelong learning fund to support the vulnerable self-employed, the debate refreshingly shifted away from the problems in the gig economy and towards credible solutions.

From its crowded main hall to its many packed-out fringe events, this year’s Labour conference was markedly optimistic, and this mood even seemed to extend to assessments of the changing world of work. Encouragingly, at Labour Conference and beyond, the self-employed are coming to be seen as a crucial part of the UK labour market, which is making regulating and supporting this vital sector an urgent priority. It’s up to politicians, working with groups like IPSE, to ensure it gets the right kind of support.