We know from previous research that freelancers, particularly limited company directors, are extremely concerned about the IR35 changes. In fact, over two-thirds (70%) of freelancers were worried about the impact of the changes while among limited company directors, who are more likely to be affected by the changes, this rose to 88 per cent.1 Similarly, in light of the upcoming IR35 tax reforms, the most highly skilled freelancers have now cited government tax policy, not the pandemic, as the leading adverse factor negatively affecting their businesses.2

How are clients and contractors reacting to the changes?

Although 16 per cent of clients have said they will use external experts to make the IR35 assessments, 8 per cent have said they will stop engaging contractors altogether. The complexity of the proposed system – and the difficulties this causes – are likely to have a significant impact on freelancers and contractors, especially if clients are simply unwilling to engage them.

The fact that 17 per cent of clients have still not indicated what they will do after the legislation’s introduction in April 2021 suggests that clients are not ready for it – and that the lack of understanding could have a damaging impact on contractors. 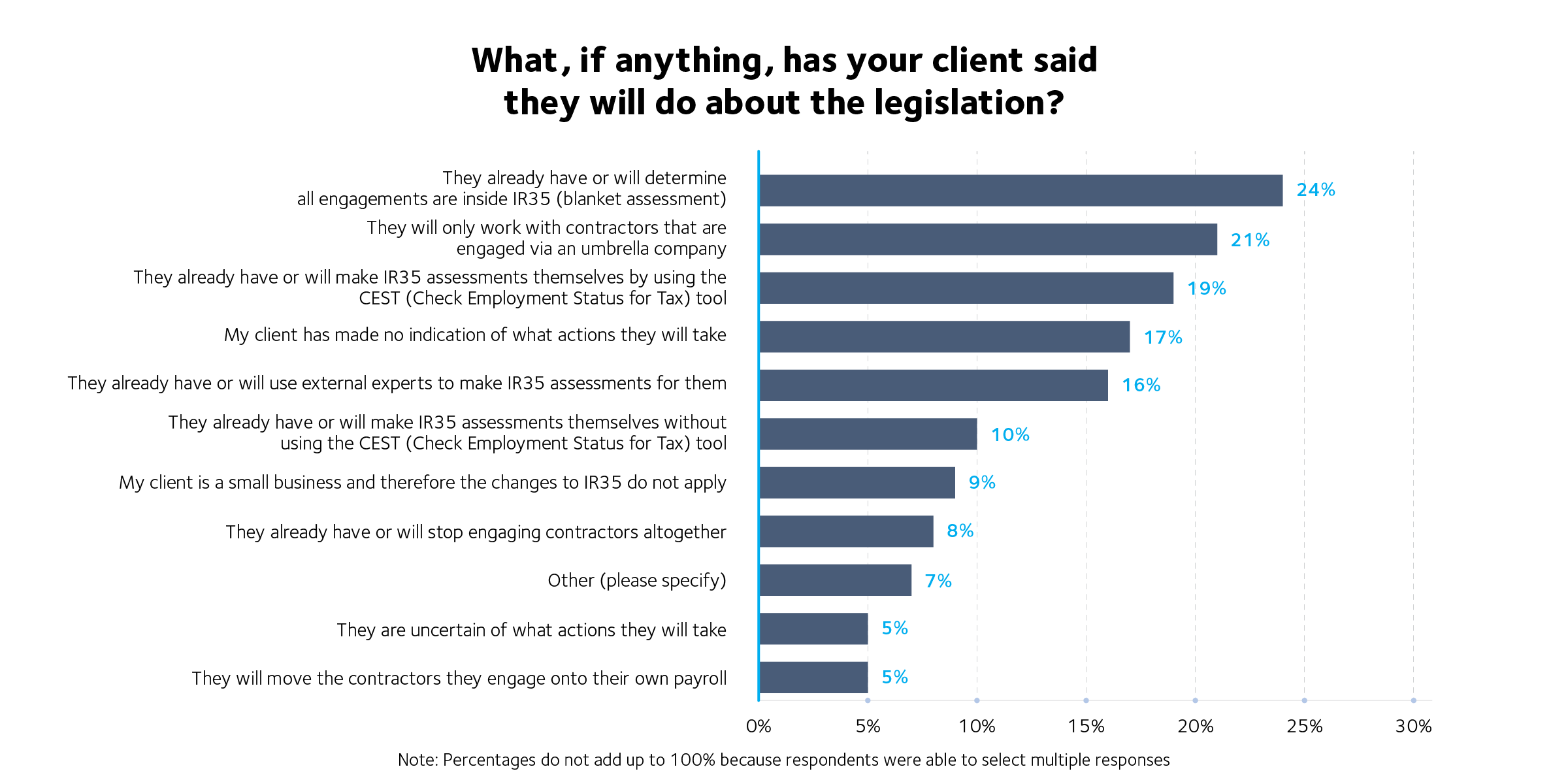 Adapting to the changes, 19 per cent of contractors said they are planning to work via umbrella companies. Overall, though, over half of all UK freelancers (56%) said they plan to continue contracting in the UK only if they can find contracts that are deemed to be outside IR35.

However, on a more positive note, one in five (20%) did say that they would continue to work as a contractor regardless of their IR35 status. 10 per cent remained unsure about how they intended to work after the introduction of the changes.

The extension of IR35 to the private sector has already been significantly detrimental to freelancers and we are yet to see the full impact of the April roll-out. In particular, the fact that 24 per cent of clients have already said that they will determine all engagements with contractors as inside IR35 – a blanket assessment – demonstrates the potentially devastating cost on the flexible labour market and the wider economy. Similarly, our findings show alarming concerns for the UK economic recovery with almost one in four (24%) planning to seek contracts abroad. In addition, with the majority of freelancers (56%) planning to look for contracts that are deemed to be outside IR35, we are likely to see widespread implications for freelancers – in particular if clients are making blanket IR35 assessments or simply refusing to engage freelancers altogether.

IPSE is the largest association of independent professionals in the UK, representing freelancers, contractors and consultants from every sector of the economy. It’s a not-for-profit organisation owned and run by its members. We believe that flexibility in the labour market is crucial to Britain’s economic success, and dedicate our work to improving the landscape for the freelance way of working through our active and influential voice in Government and industry. IPSE aims to be the principal and definitive source of knowledge about freelancing and self-employment in the UK. We work with leading academic institutions and research agencies to provide empirical evidence about evolving market trends. This research supports our work with Government and industry and delivers key market intelligence to help our members with business planning.

1. IPSE & CMME, Getting the Self-Employed on the Property Ladder, February 2021