The problem with Automatic Enrolment (AE) 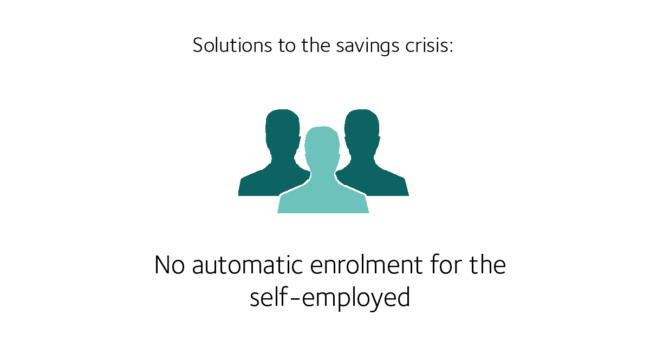 Yesterday, IPSE released a landmark report – 'How to solve the self-employed pensions crisis' – which outlines the problems the self-employed face when saving for later life and puts forward a series of recommendations to alleviate the issue. One of the report’s headline findings centres around Automatic Enrolment (AE); a policy in which an organisation seamlessly enrols its employees into a company pension scheme.

Once a company’s finance department enrols its employees, they remain in it by doing nothing (success by inertia), unless they decide to opt-out. It has been a great success for employees with 78 per cent now paying into a pension. However, in IPSE’s latest report, our research was unequivocal: this model simply would not work for the self-employed.

Why AE would not work for the self-employed

First, our research suggests that if faced with AE, twenty-five per cent of the self-employed would opt-out, 38 per cent didn’t know what they would do and only 36 per cent would remain enrolled. That means a total of 63 per cent are unsure or would opt-out.

The fact that such a high proportion were not ‘moved’ by the idea of AE is damning statistic in itself. During the focus group stages of our report, many people told us that rolling out AE to the self-employed would more closely align flexible working with employment – thus muddying the waters of the employment status debate further.

Secondly, the Government has concluded there is no clear way this would work in its review in December 2017. The primary issue is there is no easy way for the self-employed to be ‘opted-in’. The self-employed do not have a finance department to process their finances, so the primary reason why AE has been so successful – inertia – cannot be replicated. It also reduces their ability to be flexible and in control of their money – two of the fundamental attractions of self-employment.

Finally, the self-employed are a diverse group, and a one-size-fits-all approach which works well for employees is unlikely to function for the self-employed who are used to control and independence. So, what are the alternatives?

Despite the high numbers of self-employed people not saving for later life, the Government and the pensions industry should treat this as an excellent opportunity to act. Considering an overwhelming 67% of the self-employed population are concerned about saving for later life, positive intervention would go a long way. This intervention should not involve AE, but instead flexible solutions which provide the control and flexibility that attract people to self-employment in the first place.