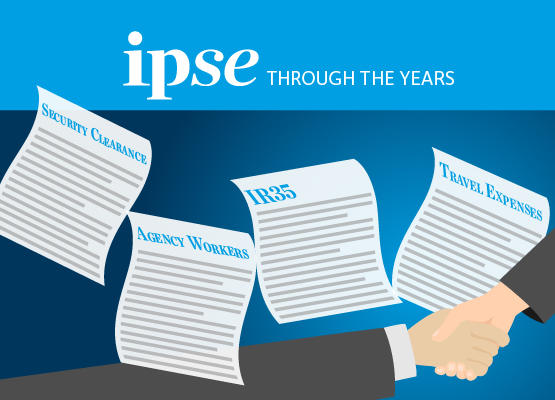 Whilst the battle against IR35 was far from over, there was a growing sense among the PCG leadership, and indeed the wider membership, that the organisation needed to broaden its horizons, address other issues and become a fully-fledged, multi-policy lobbying group.

In the two years since IR35 was announced, the organisation had built itself a political notoriety based on its confrontational approach to lobbying the legislation. Despite falling short of abolishing IR35 altogether, PCG had it reformed enough that it became what founder Andy White later called a “voluntary tax”.

IR35 remained the organisation’s primary concern but, for the Board of Directors, it had become abundantly clear that there were many other serious issues affecting contractors.

“The battle against IR35 was never lost, it remained on the statute books. In practice IR35 is manageable if you have the right advice and we set about making sure our members had that,” Simon Juden, Director and later PCG Chairman, said.

“At the time there was still a great deal of uncertainty around IR35 so people were very keen we didn’t take our eye off the ball, and we were very keen that we didn’t either. So it wasn’t a question of doing other things instead of IR35, but as well as IR35.

So it wasn’t a question of doing other things instead of IR35, but as well as IR35

“So, when I first joined the board, adopting new policies was something I was very keen that we did. Others were too, in particular Simon Griffiths. It seemed that we had the opportunity to be not just a single issue pressure group but actually a much broader representative group and a much more effective group by looking at the whole range of issues that affected freelance working, rather than just one.

“I think it’s fair to say the decision to adopt other policies was mixed from the membership. Some felt we should simply focus on IR35 but I think a majority of members appreciated there were other issues than just IR35.”

So the time had come, at various levels of conviction, to tackle policies such as the treatment of travel expenses, the Agency Workers Directive and security clearance regulations.

Limited company directors had always been able to claim relief on travel and subsistence expenses when travelling to and from a client’s place of work. However, In the late 1990’s, HMRC began waging a war against contractor’s travel expenses, many of whom were targeted with retrospective investigations dating back as far as six years.

The Treasury developed a confusing and misunderstanding questionnaire and taught their operatives how to use it to ensnare contractors and issue them bills for previous travel expenses.

“Most of the contractors I worked with at that time had a HMRC visit,” Richard Robson said. “It’s a huge annoyance for freelancers and there’s a considerable scope for misunderstanding and confusion.

“There’s been clarification on what the two-year expenses rule means. We pushed back a little bit and got the worked examples improved, we pushed and had a few meetings to get the guidance notes improved and aligned with the law to achieve clarity for our members.

“There were other challenges such as the European Working Time Directive and Agency Workers. PCG didn’t have out-and-out campaigns but it orchestrated a response which had a substantial effect.

We orchestrated a response which had a substantial effect

“In these cases, clarity was obtained by negotiating effectively with the appropriate bodies, campaigns of sorts but not on the scale of IR35.”

The Agency Workers Directive, meanwhile, was a piece of legislation designed to protect low paid agency workers by giving them a legal right to the same treatment and entitlements as if they had been employed directly by the client. Concern had been expressed that low paid agency workers were the victims of poorer terms and conditions compared to their employed counterparts.

However, the regulations did not, and should not, apply to genuine freelancers in business on their own account, who were outside the direction and supervision of their hirer, and categorically not considered a ‘vulnerable worker’.

PCG argued that the uncertainty surrounding the legislation was enough that businesses would lose confidence in their right to procure services from skilled contractors and freelancers due to the fear of unnecessary tribunal cases or legal action.

The organisation was able to successfully lobby against the government, arguing that the flexible skills provided by freelancers were vital to the economic success of the UK and the lack of clarity surrounding the legislation could put this in jeopardy.

PCG negotiated an opt-out alternative so that contractors could avoid falling within its remit and, instead, operate in a business to business engagement.

“My first job was to establish some form of trust, so we just had to meet them regarding anything,” Juden added. “I initiated a series of meetings with the Treasury - which grew into what is now the IR35 Forum. At that early stage they were very wary of us and they viewed us as little children and head bangers.

“We did well on the Agency Workers Directive. This wasn’t a major legislative change by any stretch but we were definitely having influence and having effect.”

Before, during its very embryonic existence, PCG’s successes had been built on its bold and confrontational approach to fighting IR35. It had yielded a number of ground-breaking victories but if the organisation was to establish itself as a trusted group, it needed to adopt a calmer, more sustainable method of lobbying.

“Before, we had been very much in Ministers faces. We marched into Dawn Primarolo’s offices saying ‘right Minister we are about to have a full and frank discussion,’ and that’s not really how you talk to a Government Minister,” Juden continued. “What I hope I did was establish trust and establish us and our image as a professional and serious player, worthy of being included in the policy discussion.”

Despite the policy portfolio diversifying, the campaign against IR35 had continued unabated. The organisation was utilising its newfound approach to lobbying and the yields it was reaping were extraordinarily successful.

“The early days of IR35 was just rage,” Robson added. “As the organisation matured we got a legal fighting fund and we were proposing a case law strategy for IR35. The idea was to cherry pick cases and push them through the courts.

“But, of course, it takes two to have an argument and very soon it became obvious that as soon as HMRC tackled a contractor over IR35 and then encountered professional representation, they backed off.

“They didn’t want to risk really strong cases going to court and setting case law against them. So of course they’re not going to take a case they think they’re going to lose. They just conceded, which was both good and bad.

“On the plus side, over the period we were waging that particular case law campaign, we’d probably lost four or five cases out of 1,500. We were incredibly effective. But in terms of trying to set case law, we weren’t. It wasn’t that we switched from a single-issue campaign group to tackling multiple things in the same way; what happened was we got more savvy.”

We’d probably lost four or five cases out of 1,500. We were incredibly effective

Externally, the organisations approach to engaging with the government had undergone a seismic shift. But to ensure this was sustainable, internally they had to develop a more permanent and sustainable business model.

“Simon and I both had the same views on how we could address that and, in philosophy, he and I were very close. We were living off a cash rich balance sheet but we were losing money year-on-year paying it to the former suppliers.”

The organisation had never previously hired permanent staff, instead engaging with people like lobbyist David Ramsden and press officer Susie Hughes on a contract basis. The original Modus Operandi had been an intensive six-month campaign against IR35, after which any money would be given to charity and the organisation closed down.

But with long-term goals came the necessity to make more long-term commitments.

“This led to the decision to take on staff rather than outsourcing,” continued Juden. “It didn’t make any sense to take a highly-qualified specialist contractor and ask them to spend a day of their time stuffing envelopes.

PCG had consolidated after the roller-coaster that had been the early IR35 campaign. The organisation was financially stable and the membership was steady. The sense of professionalism brought about by the hiring of staff and securing permanent office meant that a semblance of security and sustainability had been reached. A relative calm had ensued.

“The organisation grew up. It got more professional. It got better and better legal advice from people we were prepared to listen to,” Robson added. “And, although we didn’t realise it at the time, the other things we got involved in – the case law strategy for IR35, the various other pieces of legislation – were actually grooming us to be ready for section 660a.”