This morning Shadow Chancellor John McDonnell took to the stage at Bloomberg’s impressive new London HQ to announce two things. First, in his view Britain is on the Brink of a 2008-style meltdown due to mismanagement by the Conservative government. Second, only a Labour government can cure Britain of its economic ills. IPSE’s Senior Policy Adviser Jonathan Lima-Matthews and Economic Policy Adviser Ryan Barnett were invited to listen in. 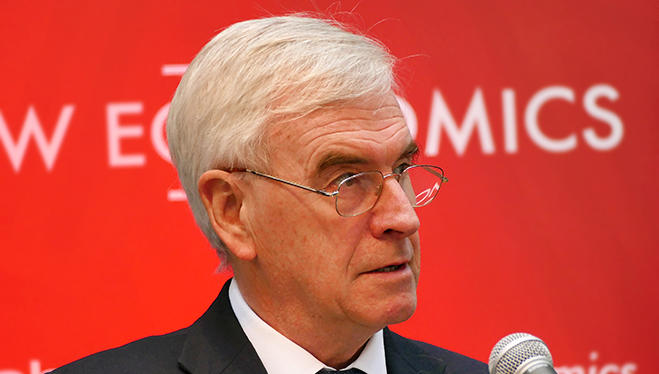 In his speech, John McDonnell painted a stark picture of how years of government reductions in spending have affected delivery of public services and inhibited economic growth. He took square aim Chancellor Philip Hammond for this and implored him to change tack.

If the chancellor isn’t prepared to do this, McDonnell said, then a Labour Party will happily step into the breach.

Most notably for the self-employed, McDonnell raised the issue of insecure work – something IPSE has also been challenging for some time, most recently in our ‘Under Pressure’ report on vulnerable self-employment.

Citing Bank of England data, the Shadow Chancellor gave a bleak overview: falling investment, manufacturing in recession and growing inequality. Growth forecasts have been revised down and business confidence is low (visible in our own Freelancer Confidence Index). Brexit uncertainty weighs heavily on our politics and the economy, but we are unlikely to see anything hugely surprising in Wednesday’s spring statement.

Treading familiar ground, McDonnell gave an idea of what Labour would offer the economy if the party was in government. This centred on investing in communities, patient, long-term finance similar to what Mariana Mazzucatto has advocated – as well as increasing the participation of workers in firms. Interestingly, McDonnell sees this last point as essential for increasing productivity, a persistent problem for the UK compared to other G7 countries.

He also promised Labour would maintain the triple lock on pensions, although this, of course, only refers to state pensions. In the past, IPSE has called for more to be done to help the self-employed save for later life. With an older self-employed population and pensions uptake in this group at only 31 per cent, this is a serious problem, which must be met head-on sooner or later.

This week’s scheduled votes on the government’s Brexit deal, with the March 29 deadline only weeks away, may finally give us some clarity. However, as the Shadow Chancellor remarked, it would be foolhardy to bet on where we will be in just a month’s time.

Regardless, there are a lot of urgent and long-term issues to address when and if Brexit is resolved. As ever, IPSE will continue to press government to support the UK’s self-employed, who will be essential to the UK’s post-Brexit economy.