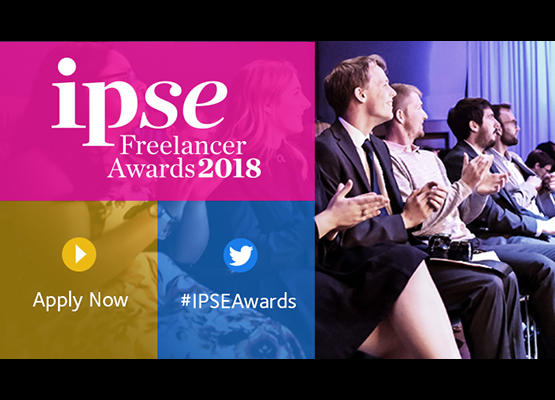 IPSE is now taking applications for its 2018 Freelancer of the Year Awards. Now in their fifth year, the awards are designed to celebrate not only the country’s best and brightest freelancers, but also all the organisations and individuals supporting the world of freelancing.

This year’s awards are:

Co-working Space of the Year

Ambassador of the Year

University Partner of the Year

As well as all the existing categories, there is also a new award for 2018: The New to Freelancing Award, with a prize of £3,000 for the best independent professional who has only begun their business in the last two years.

Freelancer of the Year winners also win a range of invaluable support tools and discounts from IPSE partners to help them build up their businesses.

The deadline for all applications is midnight, Friday 30 March 2018. Apply at www.nationalfreelancersday.com.

Chris Bryce, IPSE CEO, commented: “The IPSE Freelancer of the Year Awards have gone from strength to strength over the last five years, bringing together remarkably talented and inspirational people from right across the world of freelancing. And whether you’ve been involved before or are just hearing about this for the first time, this is your chance to get involved in an amazing event – and perhaps even win some impressive prizes!

“We’re looking for entries from all industries and different types of freelancer: from designers and developers to copywriters and coaches – last year we even had an origami artist! And it’s not just freelancers themselves either: we want to hear from anyone – organisation or individual – involved in the world of freelancing. So, whatever your background and business, if you’re involved in the world of freelancing, don’t miss out on your chance to win some great prizes and get yourself – or your organisation – the recognition and profile you deserve.”

Luke Nicholson, Freelancer of the Year 2017, commented: “Winning the Freelancer of the Year Award was an incredible honour and really fast-tracked my career to a point where I’m now gaining significantly more recognition and achieving much greater successes. It was one of the most worthwhile things I’ve ever done in my professional career so, for anyone out there considering entering, I can’t recommend it enough. Any aspirations you have, awards like this make possible.”