IPSE debate Scotland: Professor John Curtice and what parties will do for freelancers

IPSE (the Association of Independent Professionals and the Self-Employed) is hosting a debate in Glasgow on 4th December on what the main parties in Scotland will do for the self-employed. It will also feature a talk from Professor John Curtice. 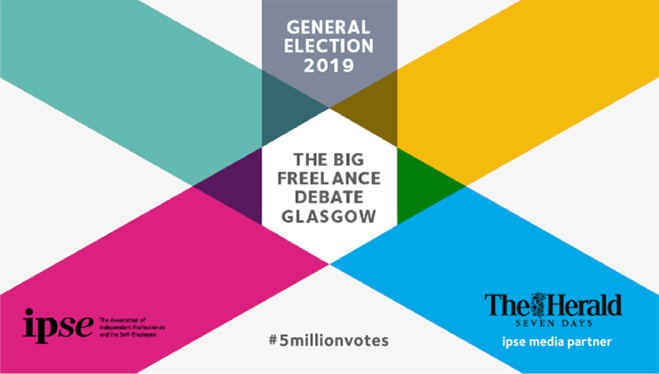 The debate will be from 6pm on 4th December at the Radisson Blu Hotel, 301 Argyle St, Glasgow G2 8DL.

It will be between Ivan McKee, SNP Minister for Trade, Investment, and Innovation, Paul Sweeney, Labour Shadow Under-Secretary of State for Scotland, Dean Lockhart, the Scottish Conservative Shadow Cabinet Secretary for Economy, Jobs and Fair Work and Carole Ford, the Liberal Democrat candidate for Glasgow South.

After the debate, Professor Sir John Curtice, one of the UK’s leading election experts, will give his insights into the 2019 General Election.

The event, including refreshments, is free and open to all. Register here to attend and also submit a debate question to the speakers.

Simon McVicker, IPSE Director of Policy and External Affairs, said: “This debate will help to not only raise awareness about the vital importance of freelancers in this election, but also hold the big parties to account on what they will do for them.

“In recent years, the number of Scots going freelance has surged to 306,000 – an increase of 41% since 2008. The Big Freelance Debate will give speakers from the main political parties in Scotland an opportunity to set out why the country’s growing self-employed workforce should vote for them.

“The votes of thousands of freelancers are up for grabs and could prove decisive in dozens of marginal constituencies across the UK, including several in Glasgow itself. That is why, from building a modern tax system to ending the culture of late payment, all parties should be listening to their needs.”