Against all odds, freelancer confidence is on the rise

Freelancers’ confidence in their business performance is in positive territory for the first time in two years despite Brexit fears, economic pressure and falling day rates, the latest Confidence Index has shown. 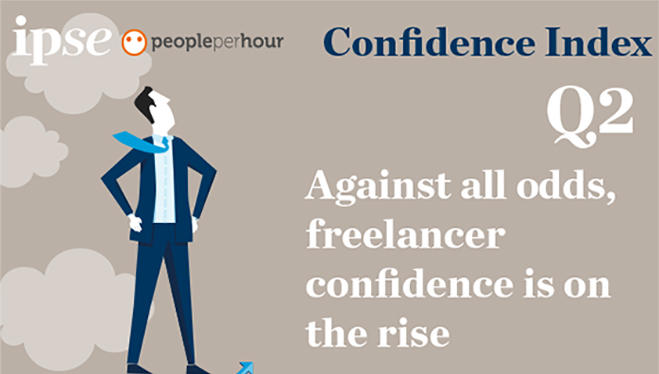 The Confidence Index, published by IPSE (the Association of Independent Professionals and the Self-Employed) and PPH (People Per Hour), showed that in quarter two (Q2) of 2018, freelancers’ confidence in their business performance in the next 12 months moved back into positive territory. It rose from -3.9 in Q1 to 5.3.* It is the highest business confidence reading since Q4 2015.

Freelancers’ increased confidence in their business performance over the next 12 months is all the more remarkable because it is set against a range of negative developments. Firstly, freelancers’ average day rates have dropped from £430 last quarter to £394.

As a result, freelancers’ average quarterly earnings have fallen by 12.2 per cent since last quarter. Their confidence in the overall economy is extremely low too, registered at -33.1*, with Brexit cited as the top reason for this.

Finally, approximately three quarters of freelancers expect their business costs to increase in the next 12 months. The average expected rise was 13.7 per cent.

Overall, this has been a bad quarter for freelancers, but this negativity – combined with their well-known self-belief and determination – has led them to be more confident about the future and their own business performance over the next 12 months. This rising confidence may also be to do with the fact that, as a recent IPSE report found, for self-employed people good work is more about skills development and having a sense of purpose than it is about money.

Suneeta Johal, IPSE Head of Research, commented: “Although there is clearly much to be concerned about here, freelancers’ rising confidence in their businesses is extremely heartening. Against all odds, they now have the highest confidence outlook for their business level since before the EU referendum. Their well-known resilience and determination is doubtless a key factor behind this – along with the fact that, as IPSE’s research has shown, there is more to self-employed work satisfaction than money.

Professor Andrew Burke, Dean of Trinity Business School, Dublin, said: “Freelancers have undoubtedly had a tough quarter, with their earnings falling by 12.3 per cent. They also expect that the economy will continue to slow down over the next 12 months – and that their business input costs will increase by 13.7 per cent. They do, however, think that from this new lower base the sector as a whole will improve marginally over the next 12 months.

“The mindset can’t just be about surviving or ‘keep calm and carry on’, however, because the changes to the sector over the next 12 months could be revolutionary. This time next year freelancers could find themselves in any number of scenarios including being shut off from customers and suppliers in the European Union. It must be hoped that we don’t end up with a ‘no deal’ scenario, but freelancers from managerial, professional and associate professional and technical occupations should nevertheless prepare a portfolio of strategies to sustain their businesses through the range of scenarios that could arise.”

Xenios Thrasyvoulou, founder and CEO of PeoplePerHour, commented: “Freelancers, by their very nature, are optimists and problem-solvers, so the fact that they’re able to find positivity in the face of relatively dismal figures perhaps shouldn’t surprise us. But it does make their fears over Brexit all the more telling.

“Fifteen per cent of the UK workforce now freelance in some capacity, full or part-time. The fact that this could be threatened by poorly planned Brexit strategies, or a return to further discussions of IR35 – as some politicians have hinted at – is deeply concerning.

“Freelancers’ business confidence for the next twelve months has risen in the last quarter. It is now incumbent on the Government to make sure that it does not return to post 2015-levels. We all need to better appreciate the contribution that the freelance network makes to our economy and our society.