Getting to know Colin Stuart, Astronomer, Author and Public Speaker 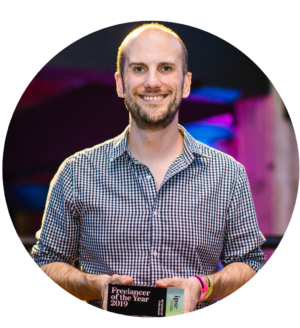 Speaking to Colin Stuart, a freelance astronomer, author, public speaker and IPSE’s Freelancer of the year runner up, it’s clear his passion has him reaching for the stars.

Colin’s enthusiasm is admirable, and I really wanted to find the key to his passion.

Astronomy is quite literally the study that is just of the out of this world, so starting the interview I just had to ask – “what drew you to astronomy?”.

“I’ve loved space since I was a kid”, Colin explains, “it’s always been the thing that has interested me the most. So, I went to university to do astrophysics, got halfway through my degree and realised that the life of an academic didn’t appeal to me – it’s often short-term contracts, where you need to move from city to city.”

It was then that Colin realised that the usual job roles around astronomy weren’t all that he had hoped.

“I thought I’d be looking through telescopes all the time but really all you’re doing is writing the computer programs that analyse what the telescope is finding and for me that wasn’t the interesting part of space – I wanted a job that revolved around space that didn’t require me being an academic.”

We then went on to speak about how he tackled this obstacle, as his answer was clear – freelancing.

“Ultimately, I moulded my own job spec – I realised that I had a knack for presentations and essays at university, so I started of thinking of careers. I found a master’s degree that was science communications – so I started to look for work experience.”

This wasn’t an easy task at first. Colin submitted over 60 applications, and only two people came back. Whilst building up his portfolio, Colin worked as a freelancer in a planetarium.

“I had to build my own job spec, as there were only really jobs out there for science professors and for science writers” Colin elaborates.

Colin then went on to tell me more of the highlights of why he enjoys being freelance.

“As a freelancer, the broad range of projects you get to work are great. Being self-employed also gives me the ability to move things around if things come up – I am going off to Chile to help with the solar eclipse, they only came to me a few weeks ago. If I had a common job, I would have had issues such as annual leave which could prevent me from going on this kind of trip.”

Not only does Colin have the flexibility within his role, but he also has control over the amazing opportunities that come his way.

“I’ve done things that you would never be able to do in a salary job – Working with astronauts, going to see solar eclipses, speaking in schools, all sorts!”

Safe to say, I am very jealous that he has met and done so many cool things in his profession. So, what was his motivation was behind his career?

“I didn’t realise until recently, when bumping into an old school friend, that I was speaking about being freelance at the age of just 14.

The reason for it, is that I have always wanted a family, having grown up in a big family.

I guess I asked myself “if I want to build this life for myself, where do I want it to go?”, the beauty of being self employed is that I don’t ever have to drop my work load, I can just shift it around.”

Colin summarises it in a way which makes it clear to me that his career is more than work to him.

“I wanted to build the life I wanted, in the hope it would work out.”

Colin made it clear that though he has had great successes, being freelance doesn’t come without challenges.

“Unless you actively seek it out, you don’t have much input from outsiders. It’s not like a salary job where you have appraisals to benchmark how you are getting on”

Colin spoke about how important it is to have a support network in place, a community that allows you to speak about different worries and helps you overcome them.

These kinds of collectives allow freelancers of all professions to speak about their common struggles and find techniques of how they can tackle them.

Finally, I asked Colin what advice he would give to somebody starting out in their self-employed journey.

“Say yes to everything and figure it out after. Don’t be scared - you need to take the opportunities when you can, and you never know what may come of it.

It’s all about finding the sweet spot between doing what you need to do to be successful and paying the bills.”

Colin has some exciting things in store, and is now on the hunt for five companies to test out his new team building workshop, “How to think like an astronaut”.

Working with many astronauts has taught Colin a lot about how people can communicate with each other in order to get better results – so be sure to keep your eyes peeled!