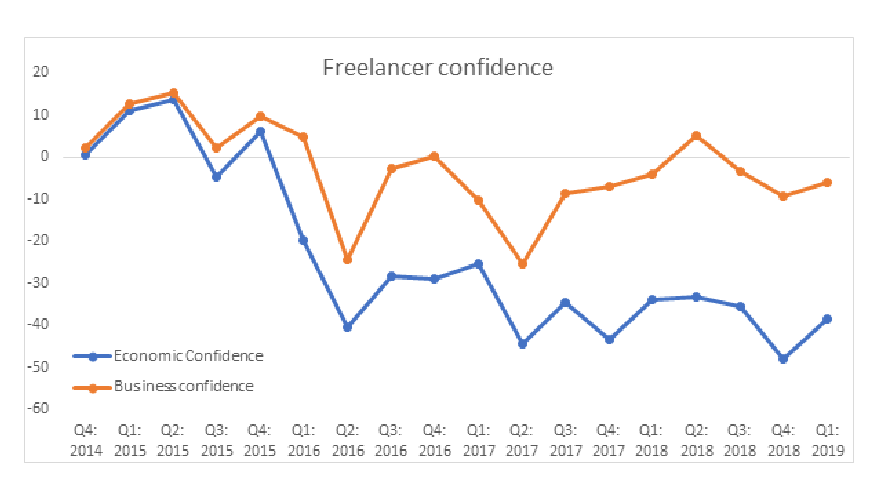 Over the final weeks of Theresa May’s government, a slew of middling economic data has illustrated a national economy locked in purgatory. Trade wars exacerbate the dour feeling in the global economy whilst Brexit remains unresolved. All the while big personnel changes in Europe and the IMF, an upcoming presidential election and a certain former Foreign Secretary becoming our Prime Minister mean one thing is for sure: nothing is certain.

Though wages are finally starting to rise, GDP growth in the last three months has only been 0.3 per cent, down 0.2 per cent since the previous quarter. It was revealed this week that output has fallen 0.2 per cent, dropping for the third consecutive quarter.

In the context of Brexit, this historical productivity problem persisting is something to seriously consider. The CBI revealed that financial services have seen a 1.3 per cent drop in business investment in the last three months – the steepest drop since the height of the financial crisis. No wonder, with a trade war beginning to impact global output too, there are warnings of a recession.

The Bank of England believe that once we enter a transition period after leaving the European Union, investment will swiftly return, boosting growth. Record levels of employment and the closing budget deficit could give the new PM more room to manoeuvre. Perhaps he will cut taxes or increase public spending, or both. Although Brexit uncertainty is undoubtedly making business decisions much harder.

A knock to freelancer confidence

IPSE has consistently highlighted how the Brexit process’s delay is causing problems for freelancers. There is a high saturation of contractors in financial services and manufacturing. These are sectors very vulnerable to disruption likely to be caused by a ‘no-deal’ Brexit.

However, the delay to leaving the EU is also holding businesses back, and its impact now is being felt across the economy. The Recruitment and Employment Confederation reported in June that “Brexit stagnation continues to seize up the jobs market…(and)…subdued confidence ensured that growth in temporary billings remained historically weak.” Indeed, the latest ONS figures for the quarter February to April indicated a transition from full time to part time hours for the self-employed.

This, as ex-business secretary Greg Clark has said, led to a sharp fall in business confidence since the delay to EU withdrawal in March. Wherever you look, be it the high street, manufacturing or recruitment, sentiment has dampened.  Our own Freelancer Confidence Index (FCI) has recorded negative results consistently since the EU referendum. If you look to the graph above, that negativity hit rock bottom as May’s Brexit deal began to fall apart, and only receded once ‘no deal’ was delayed with an extension to October.

The global economy already has plenty on its plate. Trade war has broken out not just between China and the US, but Japan and Korea too. Singapore, a country cited as an exemplar by some of those proposing a cleaner break with the EU, has since seen its exports tumble.

The IMF suggested on Tuesday that US trade policy was one of two chief threats to the global economy. The other? Brexit. The US federal reserve therefore might be on the verge of the first interest rate drop in a decade. Italy’s national debt is seen an increasing liability for the EU just as it not only manages Brexit but sees a change of Commission leadership with Ursula von der Leyen. Germany’s business leaders have been jittery for months.

These issues weigh heavily on the international economic outlook and will frame the new PM’s policy options. A PM with a very different approach to his predecessor, Boris Johnson has hinted at fundamental changes to government policy on tax, government spending and of course as we have been told consistently, the approach to Brexit.

Our next FCI will be published soon, with data taken during the middle of the Conservative leadership race. These areas are more important than ever to freelancers having to cope with not only Brexit, but the impending problem of IR35. We expect the results to be very telling.

In our new Prime Minister’s acceptance speech, he referred to the Financial Times’ claim that he starts his premiership with the most difficult set of circumstances ever. A politically fragmented country with an economy on hold beckons. If you look through history, OECD countries tend to experience recessions, be they big or small, every decade. The last one of course being the financial crisis ten years ago. However Brexit plays out, Mr Johnson may find his hands are more tightly tied than he thinks.