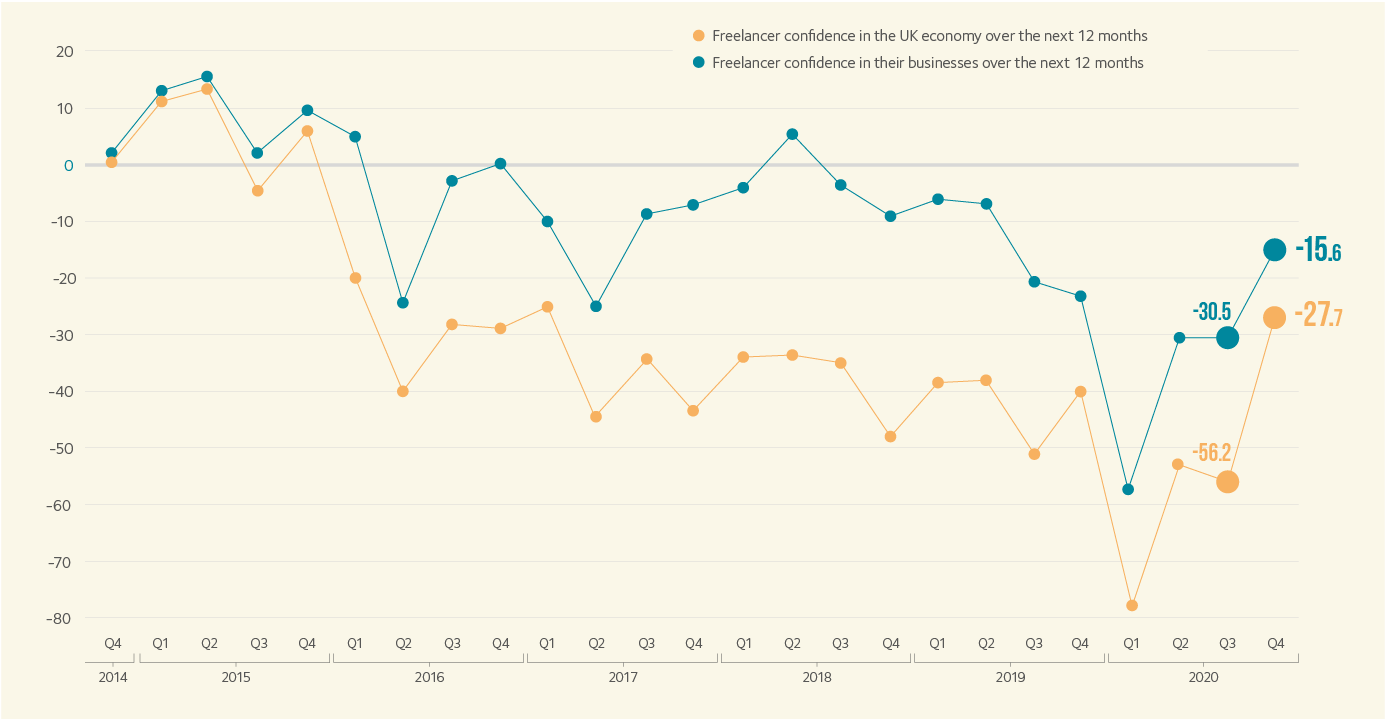 The last quarter of 2020 saw freelancers’ quarterly earnings remain at roughly the same level as the previous quarter – despite them working more (their spare capacity – the amount of time they were without work – decreased from 5 weeks to 4.3). This was because freelancers have lowered their day rates by an average of £16. This suggests increasing competition from other freelancers and the need to cut rates to secure contracts while they were available.

Overall, freelancers are also concerned about increasing costs hitting their earnings. In the last quarter of 2020, two thirds of freelancers (67%) expected an increase in their business costs – by an average of 7.9 per cent. This is slightly higher than the 7.5 per cent and 6.1 per cent increases expected in Q3 and Q2 2020 respectively.

Another significant development this quarter is that for the first time since the beginning of the pandemic, SOC1 managerial and SOC2 professional freelancers have cited government tax policy – not the pandemic – as the most important factor negatively affecting their businesses. This is most likely because of the government changes to IR35 tax policy due to take effect in April this year.

Another factor behind this change is likely to be the comparative optimism about the pandemic when the sample was taken in December. Vaccine programmes were beginning to be rolled out and the government had announced an easing of restrictions during the Christmas break. This may be reflected in the fact that freelancers’ confidence in the economy over the next 12 months was the highest it has been since 2017 (although it remained in negative territory at -27.7). Their three-month confidence in the economy was also the highest it has been since Q2 2019 at -27.8.

There was a similar optimism about the performance of freelancers’ own businesses. Although still in negative territory, their three-month and 12-month confidence in their businesses were the highest they had been since Q2 2019 at -11.9 and -15.6 respectively. It has been a consistent trend since before the EU referendum that freelancers have had greater confidence in their businesses than the economy, reflecting their resilience in difficult circumstances. The fact their confidence was higher for the next three months than the coming year may reflect their optimism before the temporary lifting of restrictions over Christmas. It may also reflect their fears about the long-term damage done to the sector both by the pandemic and also by the approaching IR35 changes. It is possible that given the renewed lockdown measures since Christmas and the concerns about new strains of the virus, the results for the next quarter will be significantly less optimistic – both for the three- and 12-month outlook.

Late payment and nonpayment: Reviewing the prevalence and impact within the self-employed sector