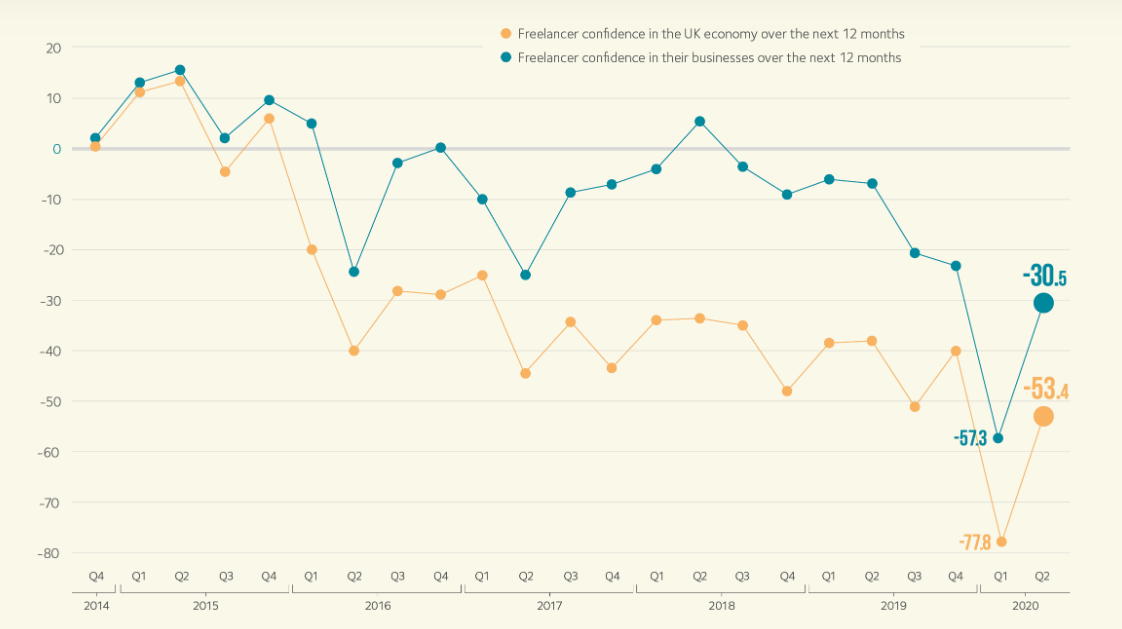 In the second quarter (Q2) of 2020, freelancers’ average income dropped by 25 per cent from £20,821 to £15,709. This was driven by the historic decrease in the amount they worked this quarter because, while average day rates fell by just three per cent, their amount of spare capacity rose from 3.3 weeks out of 13 to 5.5 weeks.

As they did last quarter, freelancers expect this situation to worsen: 61 per cent expect to see a decrease in their day rates in the next 12 months, by an average of 11 per cent. This is slightly less pessimistic than last quarter, when they predicted an average fall of 20 per cent. This may be because they have already seen some of the feared decrease this quarter. Freelancers are also pessimistic about the cost of running their businesses: they expect an average increase of 6.1 per cent in business costs over the next year.

With this stark drop in income, freelancers are understandably pessimistic about their business performance over the next three months. Although this measure increased somewhat from the record low of -62.6 last quarter, at -20.4 it is still the second-lowest score since the Confidence Index began in 2014.

Freelancers were even more pessimistic about the performance of their business over the next 12 months. This score also increased from the lowest on record to the second-lowest on record: from -57.3 to -30.5. The score may be lower due to fears of a second wave and renewed lockdown later in the year, as well as freelancers’ concerns about the changes to IR35 due to take effect in April next year. Accordingly, freelancers cited the coronavirus pandemic and the resultant state of the UK economy as the two factors doing most harm to their businesses, closely followed by government tax policy relating to freelancing.