IR35 in the private sector results from January 2020

IPSE’s research into the changes to IR35 in the private sector shows not only serious concern among freelancers, but also deep worries and a lack of preparation among clients.

More than a third (35%) of freelancers say their clients are uncertain or have not said what they will do about the upcoming changes – a deeply concerning state of affairs at this late stage. A fifth (20%) even state that they will blanket-assess their contractors as “inside IR35” – in contravention of the legislation itself.

Two out of five (39%) of freelancers said their clients will stop using outside-IR35 contractors. Instead they will either make blanket-assessments and only use “inside IR35” contractors, move their contractors onto PAYE (13%), engage them through umbrella companies (14%) or stop engaging contractors altogether (11%).

This leaves only 30 per cent of contractors saying their clients plan to keep engaging outside-IR35 contractors, assessing them through the CEST tool, with external advice or simply making determinations themselves.

The freelance community is so concerned that 32 per cent plan to stop freelancing in the UK. One in seven (13%) plan to find contracts abroad, one in ten (11%) plan to stop working or retire early and almost one in ten (8%) plan to move into employment.

Half of respondents also said they would only continue freelancing if they could find contracts to which the off-payroll working rules do not apply. Since it is unlikely this will be possible for all of them, the proportion who stop freelancing can be expected to rise.

Three out of five (63%) freelancers said that if they were found to be “inside IR35”, they would either terminate their contract or challenge the determination. One in five (18%) said they would only continue working for their client if they raised their day rate to compensate for the additional tax.

Overall, more than nine out of ten (92%) freelancers said they thought working inside IR35 – paying employee National Insurance contributions without any employee rights – was unfair.

Knowledge of the changes and concern about them

An overwhelming majority of freelancers (96%) say they know at least a little about the changes to IR35 in the private sector, with over half (57%) saying that they know a lot about them.

Level of concern was also high, with an overwhelming majority (97%) of freelancers saying that they feel at least fairly concerned about the changes and 79 per cent feeling very concerned. 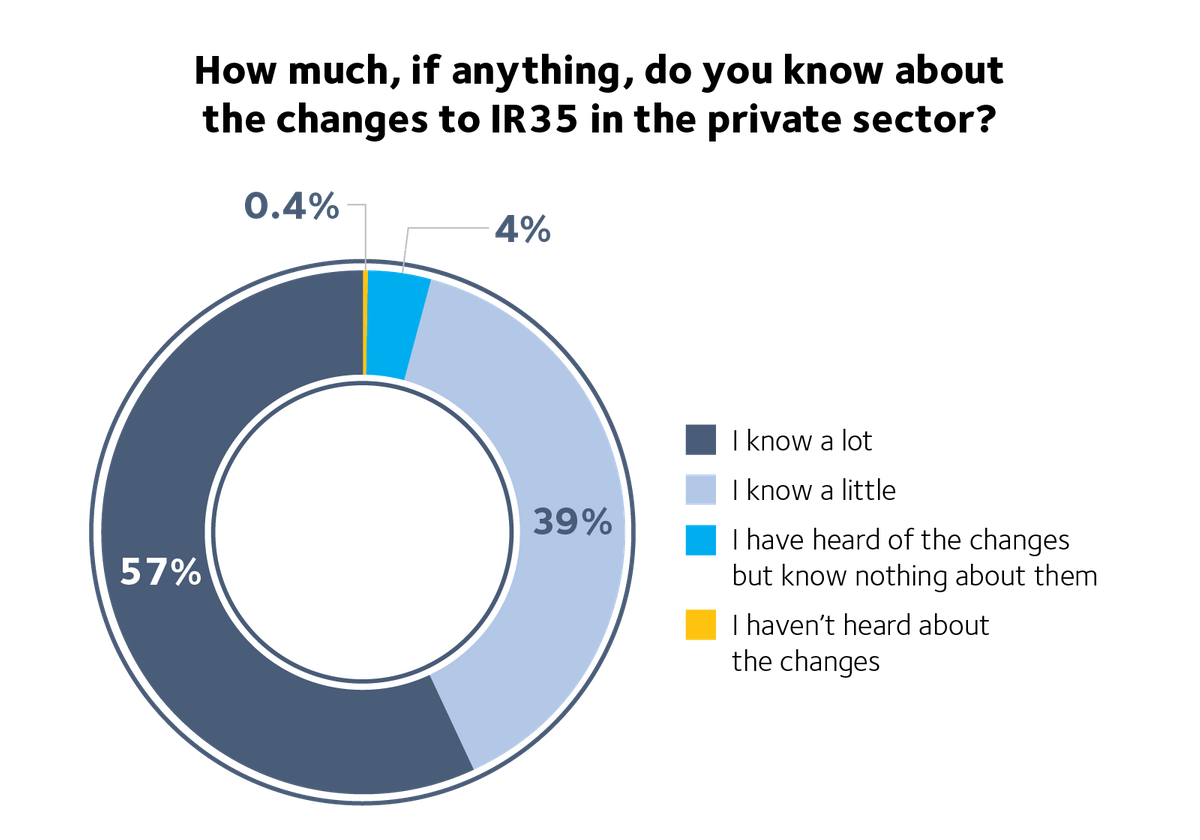 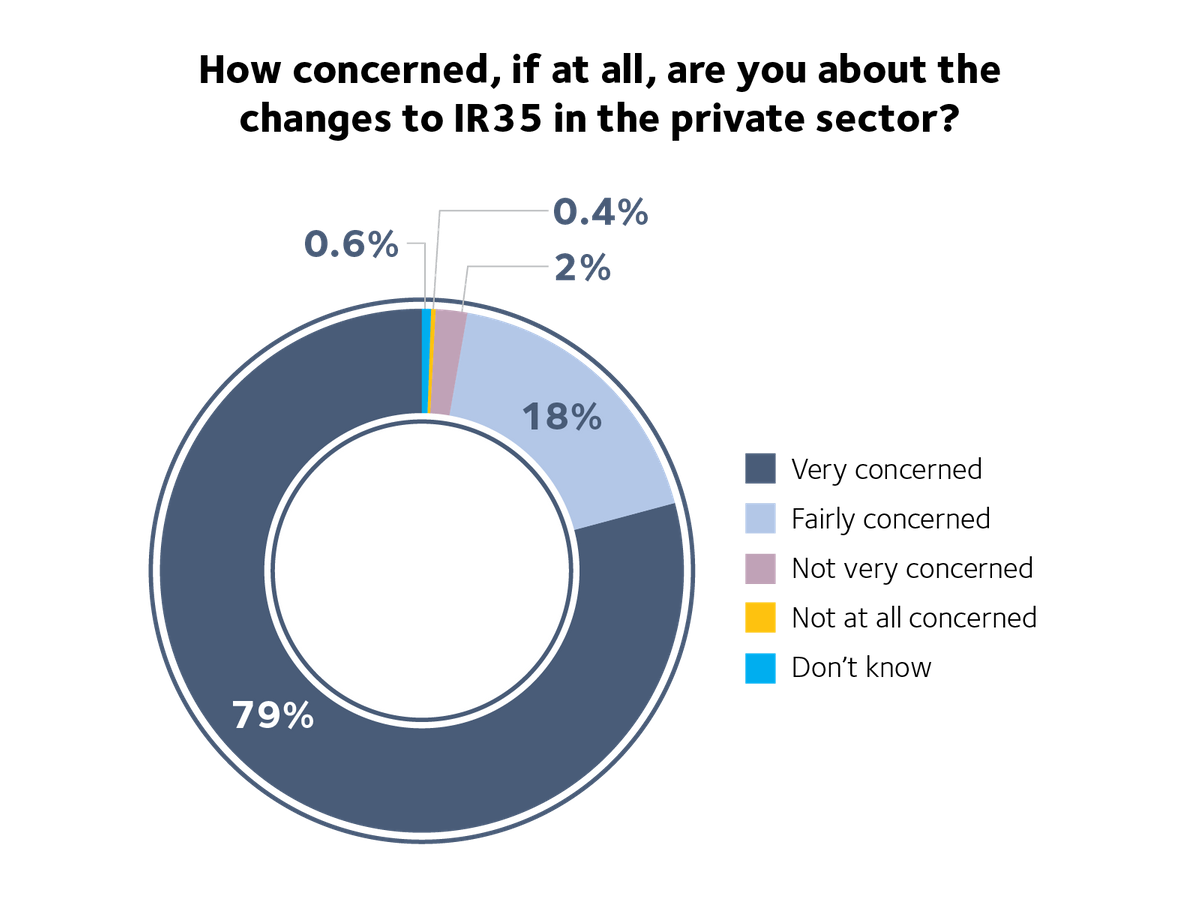 Impact of changes to IR35 on freelancers' businesses

One in seven (13%) say they would seek contracts abroad, and one in ten (11%) would either retire earlier than planned or stop working altogether.

Almost a quarter (23%) of freelancers say that their client has made no indication of what actions they will take after the IR35 legislation comes into force.

A fifth (20%) say their client indicated they will make a blank assessment and determine all their engagements are inside IR35, while one in seven (14%) outlined that their client will only work with contractors engaged via an umbrella company.

Over one in ten (11%) of the freelancers surveyed also outline that their client indicated they will stop engaging contractors altogether after IR35 in the private sector comes into force.

Looking at the combined percentages the research also shows that: 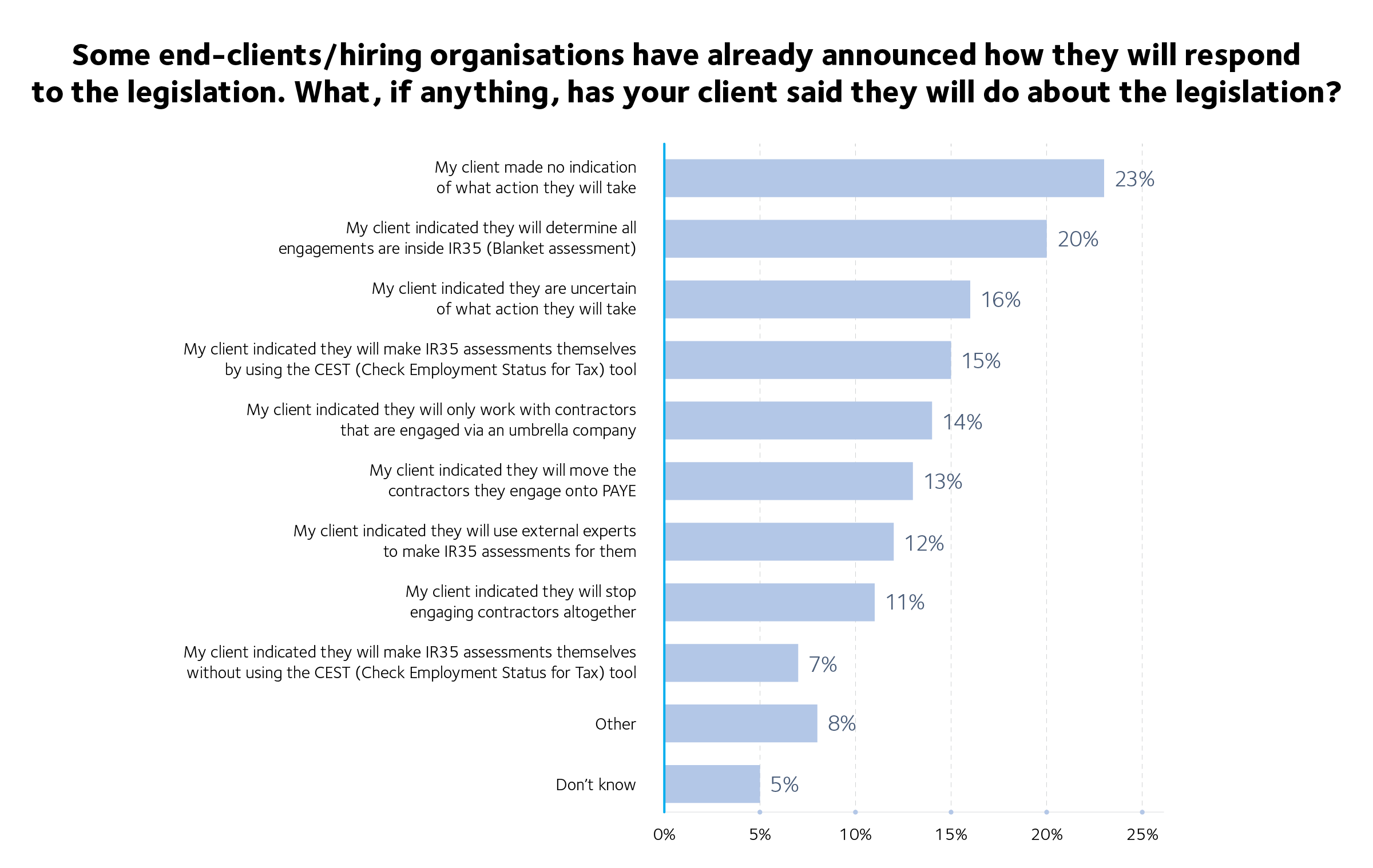 If determined inside IR35

Intentions if determined to be inside IR35

When asked what they would do if their current client determined that the off-payroll rules apply to their engagement, a plurality of freelancers (43%) say they would terminate their contract with that client. Close to a fifth (18%) also say they would continue working on that contract and increase their day rate to compensate for the additional tax liability.

Another fifth (20%) would challenge their client’s determination. Out of this fifth, half (49%) say they would terminate their contract with the client if their challenge is unsuccessful and a third (32%) would continue working on that contract but increase their day rates.

Only four per cent of all freelancers surveyed say they would continue working on a contract without increasing their day rate if their client determined that the off-payroll rules apply to their engagement.

When the off-payroll rules come into force, freelancers, if deemed inside IR35, could be required to pay the same tax and National Insurance as an employee, but would not have the same employment rights such as pension, holiday pay, statutory sick pay and statutory maternity pay.

When asked about their thoughts on this, 92 per cent of the freelancers surveyed said they think this is unfair.

Over half (53%) of them would also terminate their contract with that client if this happens to them.

Another quarter (26%) think this is unfair and would challenge their client on this.

Only one per cent of the freelancers surveyed say they think this is fair and would take no action if deemed inside IR35. 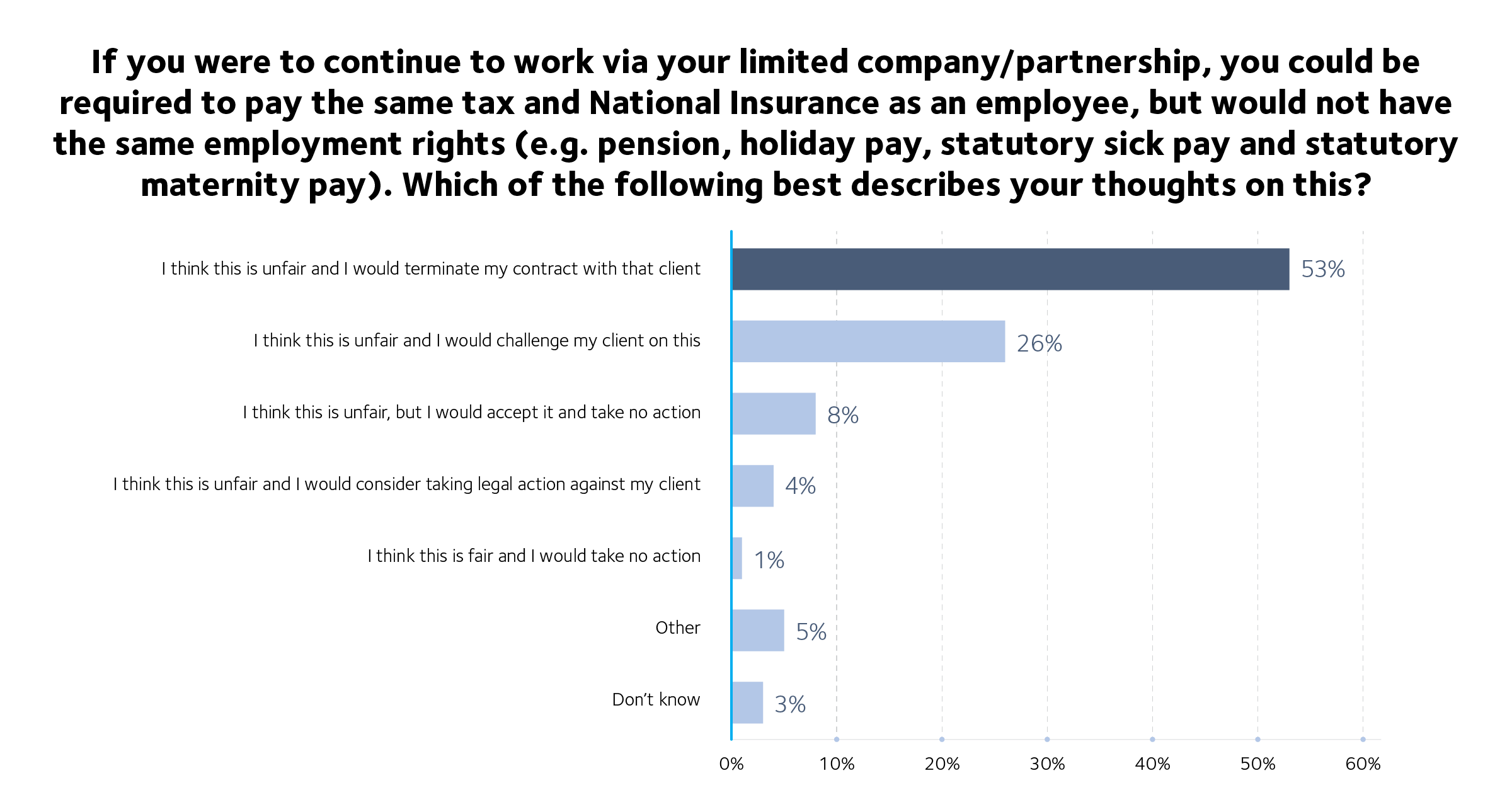 Where IR35 is deemed to apply, the party paying the contractor’s limited company (the ‘fee-payer’) is liable for secondary Class 1 National Insurance (NI) contributions – commonly referred to as Employers’ NI. They are also liable to pay the Apprenticeship Levy. In some cases, these have been passed down to the contractor by a cut in rates.

When asked what they would do if their business is asked to accept a cut in rates to facilitate the employers’ NI payment and/or Apprenticeship Levy, the vast majority (82%) of freelancers say they would not accept the rate cut and would terminate that contract.

One in ten (9%) say they don’t know what they would do and only four per cent say they would accept the rate cut. 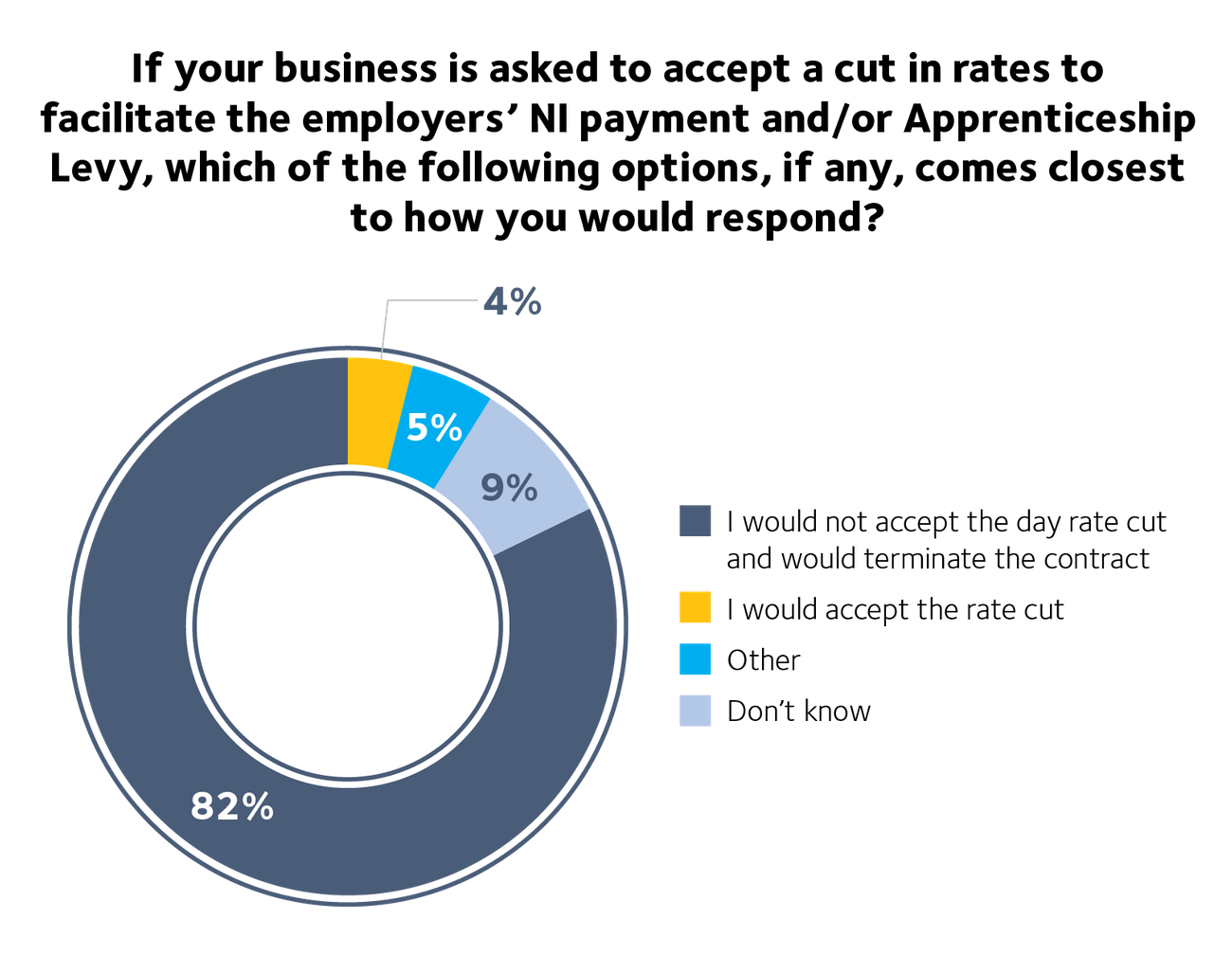 This data summary looks at research conducted by IPSE in relation to the changes in the way the off-payroll rules – commonly referred to as IR35 – work in the private sector.

The changes, that were due to come in April 2020, will bring the private sector into line with the public sector rules, which were implemented in 2017. The research sought to understand how the proposed changes to IR35 might affect freelancers’ businesses.

The analysis is based on the responses of an online survey which was open from 16th until 23rd January 2020. The survey was completed by 3,481 freelancers, 11 per cent of whom were female and 86 per cent male, with an average age of 49 and average daily rate of £554.

This data summary was written by Inna Yordanova, Senior Researcher at IPSE.

Back to the IR35 Hub