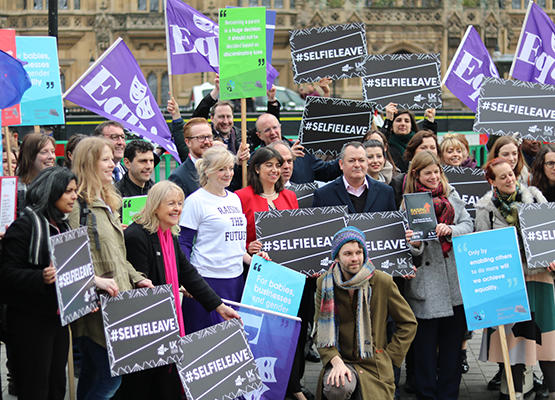 IPSE has welcomed the news today that Parliament has agreed to the preparation of a bill extending shared parental leave to the self-employed.

The bill was read by Batley and Spen MP Tracy Brabin this afternoon in the House of Commons, after a rally supporting the extension in Parliament Square. Brabin called for a bill to allow “maternity allowance to be shared in blocks between freelance parents, replicating the way shared parental leave works for those in more conventional employment.” The second reading of the bill will be on 11 May.

Imogen Farhan, IPSE Policy Advisor, commented: “We are delighted Parliament has agreed to the preparation of this bill. Existing policies place the entire burden of childcare on self-employed mothers, and deny fathers the right to bond with their children – reinforcing gender inequalities at home and work. Tracy Brabin’s bill is an important first step to challenging these discriminatory laws.

“It was recently revealed that employees have been slow to make use of shared parental leave (SPL). Opening it out to the self-employed would surely increase uptake because it would give self-employed parents the flexible support they so badly need. This is particularly because SPL can be taken in three separate blocks, whereas Maternity Allowance – the only parental pay currently open to the self-employed – must be taken in one block. According to a recent survey, 88 per cent of self-employed mothers would like to have been able to break their maternity leave into blocks.

“SPL would also help self-employed mothers maintain their businesses during the early months of parenthood. At present, self-employed mothers claiming Maternity Allowance can work for just ten ‘Keeping In Touch’ (KIT) days. If they want to work for longer, they have to stop claiming Maternity Allowance. For most, however, it is near-impossible to maintain client relations and other key aspects of their businesses in just ten short days. With SPL, however, they would be able to work up to 20 days – as well as the 10 KIT days. This would be an invaluable lifeline to self-employed parents trying to maintain their businesses in the early months of childhood.

“It is simply not acceptable that there is still so little support for self-employed parents. Given that extending SPL to the self-employed would be essentially cost-neutral, it is hard to understand why Government is holding back support to this vital and growing sector.”