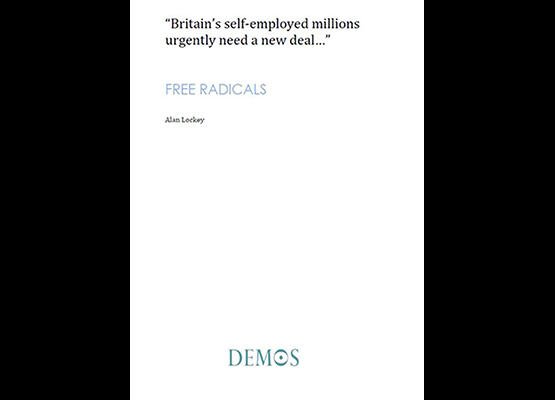 IPSE welcomes a new report by cross-party think tank Demos, which urgently calls for a ‘new deal’ for the self-employed.

With 4.8 million people, it argues, self-employment is almost as big as the entire public sector and must be brought into mainstream political discourse.

Policymakers, it says, have simply not kept pace with the rate of change in the labour market, however, leaving many self-employed with concerns about tax, over-strict government regulation, pensions, and a general lack of support. ‘Free Radicals’ argues for a new deal to address these concerns and bring UK policy up-to-date.

The report – launched today at the IPSE/Demos Policy Conference ‘Modern Working: The Age of Self-Employment’ – makes 30 recommendations to form part of the new deal, including:

IPSE CEO Chris Bryce commented: “The extraordinary and permanent rise of self-employment – which now rivals the public sector is size – is the most significant story in the UK labour market this century. We commissioned this landmark report with Demos to reveal the realities of self-employment today, open up much-needed discussion about it, and find ways to promote and support this vital and burgeoning sector.

“We especially agree with its call for a ‘new deal’ for the self-employed, and welcome almost all of the 30 recommendations to make this happen. We are also very glad the report backs IPSE’s calls for a statutory definition of self-employment being written into law, and for the Government to halt the roll-out of the disastrous changes to IR35.

“Overall, this report should help not only push self-employment to its rightful place at the heart of political discourse, but also make a vital contribution to the debate about the future of this sector.”

Alan Lockey, Demos’ Head of Modern Economy and the report author, commented: “The rise of self-employment is one of the biggest changes to the modern economy in the last couple of decades. We need to think pragmatically about whether we should actively encourage it – it could be that it is the British solution for a more flexible, less rigid approach to life and work in the future, as it already is for millions of people. That means we need a new deal to boost security for the self-employed.”