You know politics is in a strange place when the Prime Minister literally waltzes onto the stage to the strains of ABBA. And in the past, many would also have felt it odd to ask ‘Is the Conservative Party still standing up for the self-employed?’. 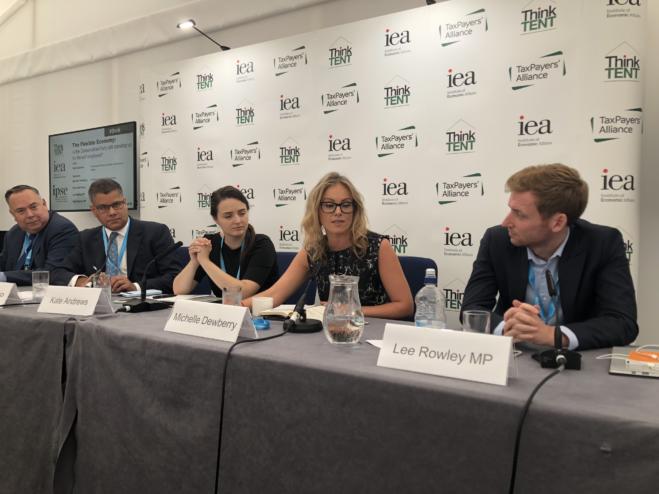 But that was the topic up for discussion at a debate IPSE held this week at the Conservative Party Conference, organised with the Institute for Economic Affairs. With last year’s attempt to raise NICs, reductions to the Dividend Tax Allowance, a punitive approach to Universal Credit and most of all disastrous changes to the IR35 tax, it should come as no surprise this question is being asked with more and more alarm.

Alok Sharma MP, Minister for Employment defended the government’s record, arguing the UK remains one of the best places in the world to start a business, with the government having supported business through reductions in corporation tax in recent years. Having himself been involved in setting up businesses, Mr Sharma did acknowledge that late payment is a serious issue with a ‘culture change’ drastically needed. Indeed on the same day, we were pleased to see Business Secretary Greg Clark MP announce a number of proposals to clamp down on late payment. These include making big businesses appoint a non-executive director to ensure prompt payment, empowering trade bodies to highlight best and worst practice and promoting innovative technologies such as the latest accounting software.

The rest of the panel was more sceptical in its assessment of the government’s approach in recent years. Former IT contractor, The Apprentice winner and business owner Michelle Dewberry outlined she was ‘very concerned about an anti-business narrative’ that had emerged within the party. Lee Rowley MP also pointed to a worrying ‘disconnect between Conservatives and business’.

IPSE’s Policy Director Simon McVicker highlighted the unease many self-employed feel –they are ‘constantly looking over their shoulders for the next tax grab’. Especially citing the ‘calamitous and outrageous IR35 changes’, McVicker called for the Party to ‘return to its roots’, and properly back the UK’s 4.8 million strong self-employed community. The Minister indicated he would take IPSE’s concerns around IR35 and Class 2 NICs back to his colleagues in government.

Reflecting on the previous week’s Labour Party Conference, there was a clear feeling in the room of frustration that the Conservatives needed to do far more to make a positive case for free markets and enterprise. Rowley expressed his belief in the ‘moral case for capitalism’, and his disappointment that ‘we don’t argue for it’. Dewberry spoke for many when she stated people are ‘confused about where the Tories stand on business’.

Turning to the future of work, Sharma expressed confidence that technological change would actually lead to more jobs being created, but there were issues about ‘where and what type’ of roles would exist – this is something the government is looking to be proactive on through a greater focus on technical education and reskilling, particularly around the Apprenticeship Levy and National Retraining Scheme.

This discussion on the changing world of work inevitably touched on the so-called “gig economy”. Dewberry argued this was in fact a ‘lazy’ term, used to conflate many wildly different types of work. The UK should ‘tread very carefully’ around over-regulating this type of work according to Rowley – he made a strong case that young people especially want more flexibility in their working lives, which the “gig economy” helps deliver. Sharma explained that it was the government’s position that we must ‘maintain flexibility but prevent exploitation’. This was a central issue within the recent Taylor Review and government’s Employment Status Consultation – McVicker outlined IPSE’s view that we are currently ‘in a grey area where the courts decided’ and a statutory definition of self-employment would help prevent exploitation.

The problems around IR35 were discussed, with Dewberry recounting her time as an IT contractor when ‘IR35 was the bane of my life’. Building on this, Rowley argued we ‘need to look at our wider taxation system and restructure it’ – IPSE would certainly agree we need to have a proper look at our tax system and make sure it is fit for the reality of work in the twenty-first century.

Following an audience question, McVicker was forthright in noting there is a ‘problem’ with the self-employed and pensions – simply the self-employed are not saving enough for retirement. He outlined that auto-enrolment can never work for the self-employed, but that more flexible models such as the “sidecar” could work. We hope the Minister took on board this suggestion and look forward to engaging with his department in the coming months.

But most importantly, we hope the government starts to walk the walk in its support for small business and the self-employed. There is clearly frustration within the party over its approach in recent years. A bolder more positive message is needed – celebrating the positive difference the self-employed make for the UK economy, supporting them in the challenges they face while overseeing a fair tax system that does not unfairly penalise them. We look forward to working with the Conservatives to make this a reality.