How to solve the self-employed pensions crisis 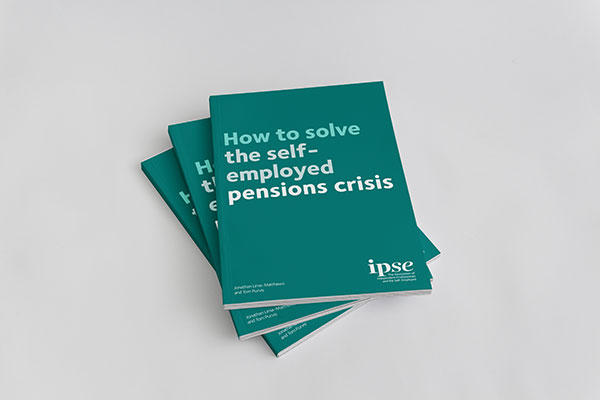 Since 2000, the UK’s self-employed sector has undergone a massive boom; increasing by 50 per cent to a staggering 4.8 million dynamic, innovative people in 2018. But as the number of people entering self-employment grows, the proportion of those saving for later life is failing to maintain pace.

Launched today, a new IPSE report – 'How to solve the self-employed pensions crisis' – reveals the true extent of this looming crisis. Research carried out by our partner, ComRes, shows just 31 per cent of the self-employed are saving into a pension, highlighting the unavoidable need to act now before it is too late.

IPSE is concerned that if this issue is not addressed, sooner rather than later we will face serious consequences as the current generation approaches retirement age. The state pension is already under significant pressure and its future has already been called into question in recent years.

Failure to alleviate the self-employed pensions crisis will only exacerbate the burden on the state further. If a large proportion of self-employed people enter retirement and rely on the modest state pension as their primary, rather than supplementary source of income, we may see an increase in pensioner poverty and a downward shift in living standards.

Our research shows three groups most at risk: those new to self-employment, women and younger self-employed people. With the rate of women entering self-employment growing by 75 per cent, and the sharp rise of 16-24-year olds (104,000 in 2001 to 181,000 in 2016) these sub-sections of the self-employed simply cannot be ignored.

IPSE has identified a series of issues which have contributed to low rates of self-employed people saving for later life.

Using nationally representative research – which comprehensively analysed the attitudes of over 1,000 self-employed people – as well as a broad consultation with the industry and Government, we developed a number of recommendations to combat the issue:

Despite the high numbers of self-employed people not saving for later life, the Government and the pensions industry should treat this as an excellent opportunity to act. Considering an overwhelming 67% of the self-employed population are concerned about this issue, positive intervention would go a long way.