With the opinion polls tightening, the UK’s 5 million self-employed voters could be crucial in deciding the outcome in dozens of constituencies up and down the country.

IPSE has analysed of all the seats in this upcoming election to see exactly where the self-employed will play a crucial role.

We’ve used ONS data to find number of self-employed in each constituency and compared this to the majority of the incumbent MP When the dust settled after the last election there were 91 seats where the self-employed was larger than the majority. Since then, this has more than doubled.

There are 186 seats in this election where the number of self-employed is larger than the majority. This includes the Prime Minister’s own seat in Uxbridge and a raft of targets for each party.

So which seats currently held by the main parties could be decided by freelance votes?

Several members of Cabinet, including Boris Johnson in Uxbridge, Theresa Villiers in Chipping Barnet and Zac Goldsmith, could be at risk. Former candidate for London Mayor Goldsmith’s Richmond Park constituency has a majority of only 45, yet there are over 16,000 self-employed in his seat.

Former leader of the Conservatives Ian Duncan Smith’s seat of Chingford and Woodford Green (a big target for Labour’s Faiza Shaheen) has a majority of 2438, but there are 10,600 self-employed.

Unlike the Conservatives, the Shadow Cabinet tend to have much bigger majorities. However, many Labour targets and northern Brexit-voting seats which are Conservative targets could be under threat. Of this “Red Wall” Workington, Crewe and Nantwich, Bishop Auckland Ashfield, Wakefield have all been mentioned as major Conservative targets – all these seats currently have higher numbers of self-employed people than the existing majorities.

Battersea, Canterbury and Kensington, the three biggest shock Labour wins from 2017, also fall into this category. 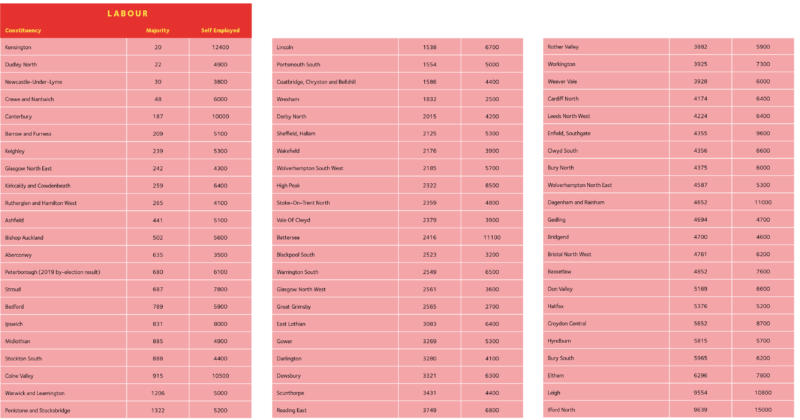 Scotland is home to a very large proportion of marginals, include many three-way contests. We estimate 26 seats held by the SNP are capable of being swung by freelancers and contractors. Nearly every seat in Glasgow could be affected. 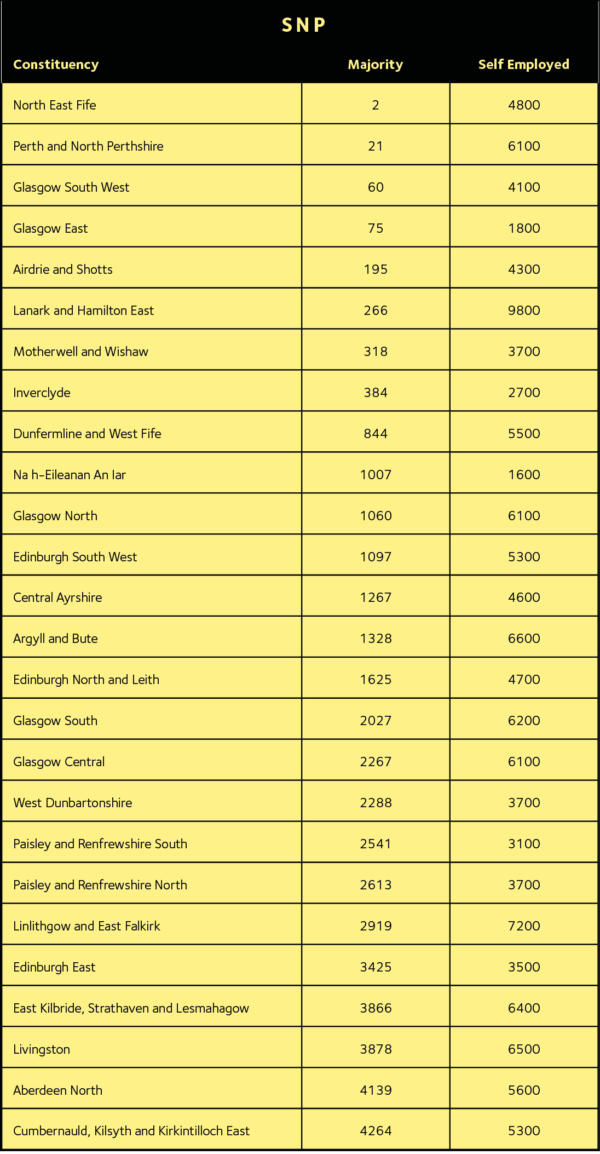 The Liberal Democrats currently hold 21 seats and have been looking to target many more. 9 seats, nearly half, have majorities which could be held or lost because of how the self-employed vote. This includes recent leader and former business minister Vince Cable. 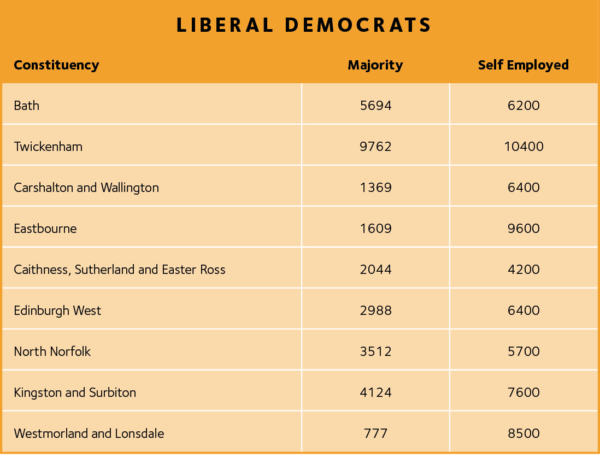 There are 5 Million votes to be won from the self-employed in this election. IPSE has drawn up a manifesto with a range of policies, illustrating what the next government should do to serve the needs of the self-employed.

If you want to find out how each party is doing, check out our manifesto scorecard.