2020 begins for us here at IPSE with the exciting news that our freelance Confidence Index is being relaunched. Running since 2014, the Index has tracked business confidence, earnings and general economic sentiment among the freelance community. 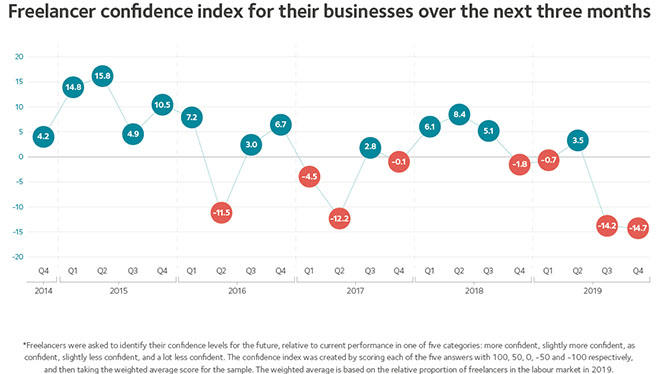 With a new decade upon us we felt it needed a few changes, with less text and a more modern presentation style. You can read all about the latest findings here.

We are also excited to announce that in the spring I and our Senior Researcher Inna Yordanova will be launching a longitudinal report looking at the last six years of survey data. This will really dig deep into how the world of freelancing has changed in its relationship with the economy in that time.

The results of the latest Confidence Index

The results of this survey were taken in the last two weeks of the general election. At that time, as we highlight in the report, the indications from polling and the currency markets were that there was a high likelihood of a Conservative party majority. This meant a resolution of sorts to the current Brexit impasse.

We know now that those predictions were correct, and however Brexit plays out, the parliamentary logjam over the withdrawal agreement is certainly over and the government is in a strong position to get legislation through with ease. Anticipating this, freelancers’ confidence in the wider economy returned to roughly its average post-Brexit referendum level. Once the trade negotiations enter their later phases, some level of Brexit uncertainty may return: time will tell.

Despite the uptick in wider economic confidence, freelancers’ confidence in their businesses continued to fall. This is most likely because of the expected roll-out of the changes to IR35 into the private sector in April.

These same rules have been in place in the public sector since 2017, where they created an overly complex and burdensome regime which has cost government departments in both money and skills. There is confusion across the private sector about how these new rules should be implemented, creating both uncertainty and negativity for freelancers who expect to be affected. This is the last thing they need after 2019’s Brexit malaise.

Looking at the wider economy, there are some positive signs. Britain seems to have avoided a recession, with the Bank of England predicting a boost to investment once we leave the EU. Sentiments are more positive in the financial services sector too, according to the latest data (January 13th). However, the economy contracted somewhat during the election period. And there is an increasing expectation that the Bank of England will cut interest rates soon. As a result, there are signs the post-election boost to the economy is starting to dissipate.

One trend to note is that the price of gold has hit a post-recession high. Gold is seen as a safe haven to store wealth and previously peaked in the years after the 2008 crash when interest rates were extremely low but there was also little tangible investment in the economy. Perhaps the same is happening now as the debate moves on from Brexit to the wider economy.

Once again, the freelance community reflects much bigger trends in the wider economy. Brexit may be “done” for now but with the impending changes to IR35 and the continuing sluggishness of the global economy, there may still be more gloom to come.