In the third quarter of 2020, the second full quarter after the advent of coronavirus and the associated restrictions on people’s lives, we may be seeing the settling of several trends. Our metrics for earnings, capacity and 12-month confidence remain very similar to the second quarter’s results. However, short-term confidence in the economy remained low as winter approached, and the now extended government support schemes were due to draw to a close. Talk of mass unemployment on a par with the 1980’s or 1990’s was also prevalent in the press, amongst MP’s and economists alike. 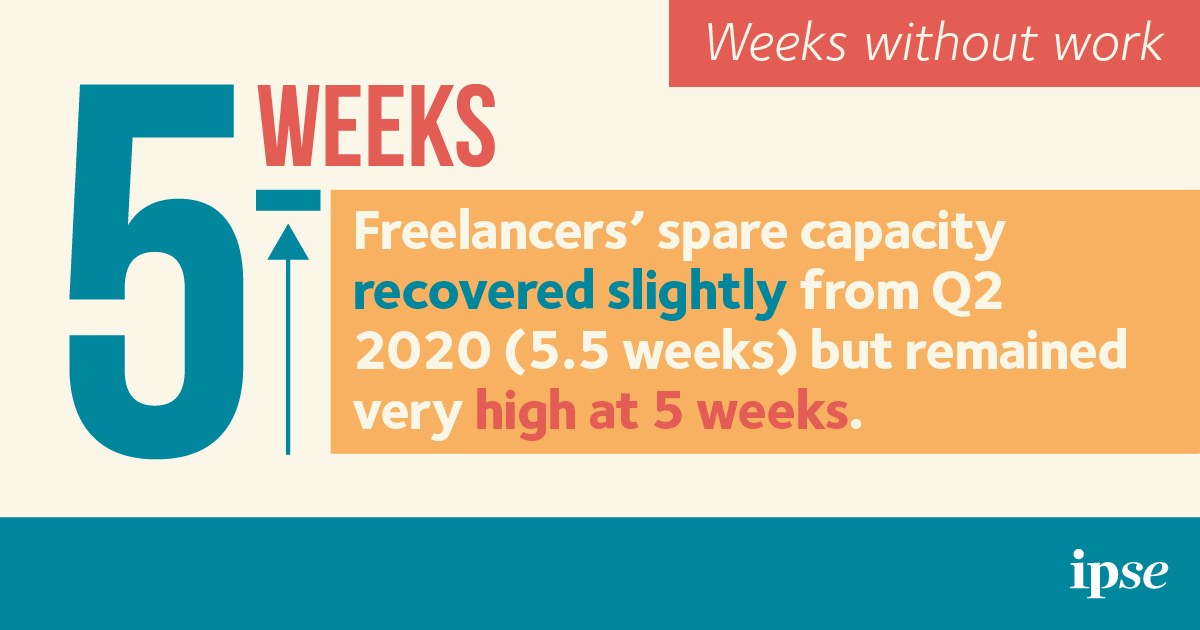 Overall, freelancers remain negative about the prospects for both their businesses and the UK economy for the next year, predicting the negative effects of the COVID-19 pandemic to continue to have an influence on the sector and the economy, alongside other underlying concerns they have about the impact of the introduction of IR35 in the private sector.

Our data was taken prior to the government’s announcement of an England wide lockdown until the 2nd of December. At the time, the ‘furlough’ scheme for employees, which can be accessed by company directors was winding down, set to be replaced by the ‘Job support scheme’. This replacement was flagged by the government as supporting only ‘viable jobs’, along with a much-reduced self-employment scheme supporting only 40% of income compared with 80%.

While freelancers’ business volumes have declined over the course of the last year, their day rates have remained almost unchanged with only a 1 per cent decrease since Q4 2019 showing the resilience of the sector. Furthermore, this quarter freelancers even managed to secure a small three per cent increase in day rates from £416 to £428.

Freelancers’ minor increase in day rates, combined with a small decrease in spare capacity this quarter has contributed to a ten per cent rise in their quarterly earnings from £15,709 to £17,305.

Freelancer’s spare capacity reached an unprecedented record high of 5.5 weeks (out of 13) in Q2 2020. This quarter it has only marginally improved to 5 weeks from 13 not working.

Comparable ONS data indicated that the self-employed worked as little as 17.5 hours per week on average in the third week of April, at the height of restrictions and before most economic support was practically in place.

They now average 10 hours less per week than in March. Though their day rates have fluctuated depending on SOC group, this hasn’t translated into higher earnings precisely because they are still working much less than on average.

An uncertain winter lies ahead for freelancers

This lag on earnings could potentially be contributing to their general negativity, along with the fears around ongoing lockdowns. Short term economic confidence has waned once again, illustrating growing negativity as the country moved through a local approach and to a national lockdown, in line with rising cases.

Since data was compiled, we have had some positive news regarding vaccine development. The government have also dramatically u-turned, announcing a new lockdown in England to accompany those in the other nations, and along with it a return of full furlough and 80% support for self-employed wages, if you are lucky enough to be eligible.

However, it is not certain when a vaccine might appear. Renewed government support is available until the Spring for employees, but the Self-Employed equivalent is to be reviewed in January. The Treasury are clearly keen to reduce the huge coronavirus support bill as soon as possible, and will likely try to once again if the economy is looking up.

What complicates this picture is that, at the time of writing, a no Brexit deal has been agreed and plans are being drawn up for emergency measures in case a deal goes to the wire, or past the December 31st deadline.

The next set of data will probably give us a clearer picture of a ‘new normal’ for freelancers, with the biggest question being if earnings recover, or remain dampened. It could show an economy in stasis, supported by government spending and waiting on a vaccine and a deal with the EU. One eventful year on from a general election, freelancers go into a December once again full of uncertainties.