February’s Member Meet-Up: A call for views on regulating the umbrella market

For February’s IPSE Member Meet-Up, members reflected on their experiences of operating via an umbrella company and shared their views on potential regulation of the umbrella market. With the government currently calling for evidence on this issue, the concerns raised by members will directly feed into IPSE’s upcoming consultation response. 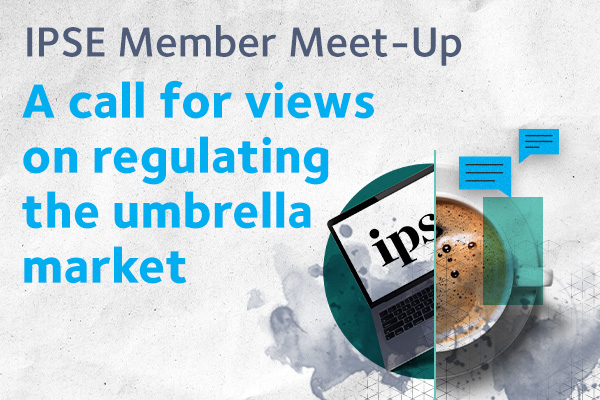 Experiences of operating within the unregulated umbrella market

The meeting facilitated discussion on the impact of working via an umbrella company, how they view their own employment status and also concerns, namely around mortgages, pension contributions and training and skills.

We heard experiences of members operating in via an umbrella company in sectors ranging from IT and telecommunications to financial services and the public sector.

The discussion initially focused on the experiences of members regarding pensions and in particular, the ease of transferring from a previous pension provider.

There were reports that some umbrella companies are taking an admin fee when dealing with salary sacrifice whilst others also reported that delays in establishing a pension with their umbrella company has resulted in a significant administrative burden.

Similarly, one member revealed that their umbrella company would only deal with certain pension providers and had also issued a limit on the amount of salary sacrifice that could be taken.

In fact, another member actually reported that they have now stopped their salary sacrifice contributions as their umbrella company refused to move it across to an existing private pension.

The reports from members during the meeting closely aligns with IPSE’s recent research findings which revealed that over a quarter of freelancers (28%) were either somewhat or very dissatisfied with their pension arrangements at their umbrella company.

Concerns around training and skills

Another concern expressed at the meeting was the refusal of umbrella companies to cover training costs when employees benefit from having the accreditation covered.

In particular, some members expressed anger at having to cover Employer’s National Insurance, and where applicable, the Apprenticeship Levy, and yet, not access training via the umbrella company.

We heard how up-skilling had been especially important during the pandemic for one member but had now been unable to access training and skills improvement as a result of working via an umbrella company.

IPSE is currently calling for the ringfencing of umbrella companies’ apprenticeship levy payments to create a self-employed business skills fund.

The meeting also allowed for members to share how they view their employment status now that they operate through an umbrella company.

IPSE Member Meet-Ups run on the last Thursday of each month and allow members to discuss and learn from each other’s experiences, but also inform our policies, research work and more.

Spaces are limited to 30 to keep the sessions manageable, so if you’re interested in joining we recommend signing up early. Keep an eye out for an email about next month’s – coming soon.