Buoyed by the arrival of fresh optimism surrounding vaccines and the potential for a temporary lifting of restrictions over Christmas, it is no surprise that freelancers’ confidence in their businesses and the economy increased in the final quarter of 2020. 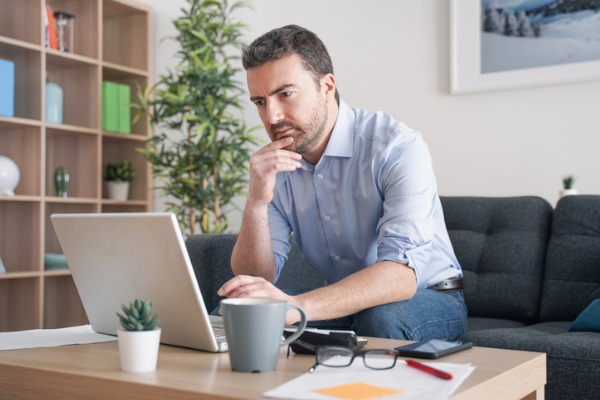 Our measures on spare capacity, the amount of time without work, also indicated a slight increase, with freelancers working more. However, earnings remained relatively stable. This indicates that, in Q4 2020, freelancers were working more hours for less pay. The cause of this could be increasing competition from other freelancers and the need to cut rates to secure contracts while they were available. This worrying trend, coupled with the renewed lockdown measures introduced in January 2021, indicates that this rise in optimism could be short-lived.

Self-employment after the coronavirus pandemic

Freelancers’ confidence in their own businesses also increased to the highest levels since 2019. However, despite these improvements, both the 3-month and 12-month levels remain in negative territory. For instance, SOC3 associate professional technical freelancers saw confidence levels increase from -16.5 in Q3 to -3.9 in Q4, while SOC1 managerial freelancers and SOC2 professional freelancers saw increases of -26.7 to -11.2 and -24.9 to -20.9 respectively. This increase in confidence for all three occupational groups compared to Q3 is indicative of an overall growing optimism throughout the sector.

Overall, the factors that were negatively impacting business performance remained the same as previous quarters. Notably, the coronavirus pandemic, the state of the UK economy and government tax policy relating to freelancing. For the first time since the start of the pandemic, SOC1 managerial and SOC2 professional freelancers cited government tax policy, not the pandemic, as the leading adverse factor affecting their business, highlighting the growing concerns about the IR35 tax reforms due to be enforced in April this year. 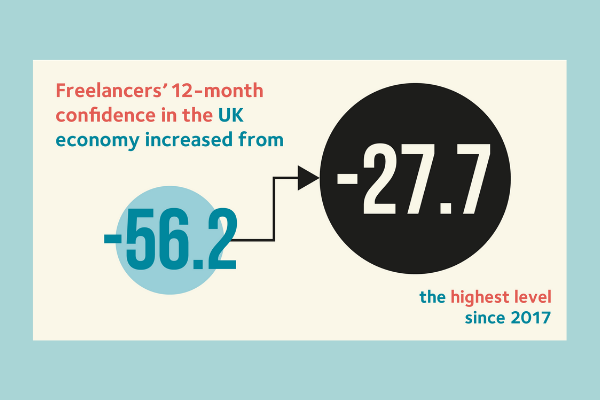 How much do freelancers earn during the coronavirus pandemic?

The final quarter of 2020 saw freelancers’ quarterly earnings remain at roughly the same level as the previous quarter despite an increase in the amount of time worked. Time without work decreased in Q4 2020 from 5 weeks to 4.3 weeks, however, freelancers reported that on average they were charging £16 a day less than in Q3 2020. This alarming outcome suggests increasing competition from other freelancers has led to a subsequent reduction in rates to secure the limited availability of contracts.

However, this story was not the same across all the occupational groups. SOC3 (associate professional and technical freelancers) and SOC1 (managerial freelancers) saw the sharpest cuts in day rates with rates falling from an average of £254 to £232 and £555 to £526 respectively. SOC2 professional freelancers, in contrast, increased their rates slightly from £519 to £529 on average.

Freelancers expect an average decrease of 9.1 per cent in their day rates over the next 12 months. The prospect of further and sharper cuts remains a concern for the self-employed, especially for those unable to access government support throughout the pandemic. 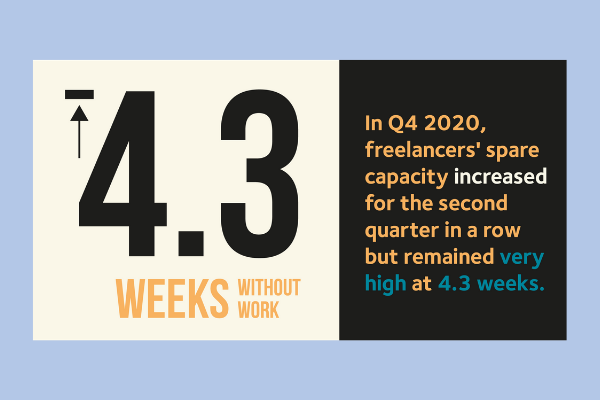 Economic predictions for freelancers in 2021 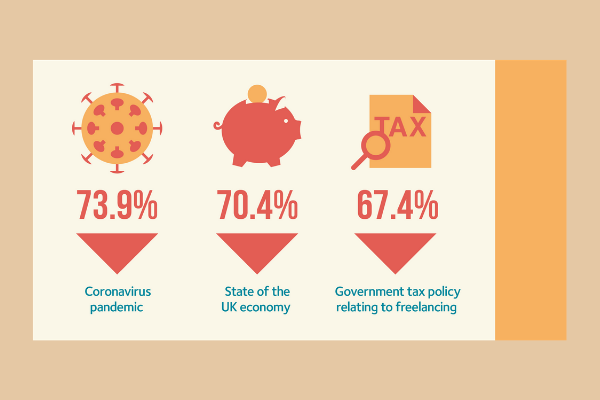 Overall, the Q4 2020 Freelancer Confidence Index showed that while confidence in freelancers’ businesses and the wider economy was rising, growing concerns about government taxation policy and the upcoming IR35 reforms was also rising. In addition, although freelancers were on average working more this quarter compared to Q3, they were working for lower day rates.

With fears around emerging variants and the renewal of lockdown measures in the first quarter of 2021, the results for the next quarter are likely to be significantly less optimistic both for the three and 12-month outlook. The next set of data will also be key in assessing whether freelancers working more for less pay becomes a concerning trend. Let’s hope not.