In terms of skills and occupations, the majority of Standard Occupational Categories (SOC) experienced significant decreases over the past year. SOC1 managers, directors and senior officials saw the biggest decrease in numbers, with the skill group falling by 30 per cent between 2020 and 2021.

The only skill groups to increase last year were SOC8 and SOC7. SOC8 (process, plant and machine operatives) saw a modest increase of one per cent, while SOC7 (sales and customer service occupations) grew more rapidly at 108 per cent since 2020.

Looking at specific occupations, the number of people working in the biggest solo self-employed occupational group, construction and building trades, dropped by ten per cent to 366,000. The third biggest group, artistic, literary and media occupations also decreased, with numbers falling by 14 per cent to 258,000.

On the other hand, road transport drivers and agricultural and related trades occupational numbers both rose by six per cent to 276,000 and 185,000 respectively.

Among highly skilled freelancers, there was even more variation, with managers and proprietors and functional managers and directors experiencing a 44 per cent and 26 per cent decrease between 2020 and 2021. Conversely, therapy professionals and media professionals experienced increases of 29 per cent and 41 per cent respectively since 2020, with each occupational group now accounting for four per cent of all freelancers.

While self-employed workers remain overwhelmingly male and middle-aged, there are signs that the workforce is slowly becoming more representative of the overall population. The small swing in favour of women we saw in the last two reports for 2019 and 2020 has continued this year, with the number of female self-employed workers increasing by one percentage point compared to 2020.

Disabled people are increasingly joining the self-employed workforce, with there being a seven per cent increase in the number of solo self-employed with a disability since 2020.

The decline of the solo self-employed has been very varied across the UK’s regions. There was a moderate decrease in most regions and the only increases were in Wales (30%), East of England (8%) and the North East (4%). Northern Ireland and Scotland reported the largest decreases at 31 per cent and 15 per cent respectively. The sharpest declines in the highly skilled freelance sector were concentrated in the West Midlands at 26 per cent. 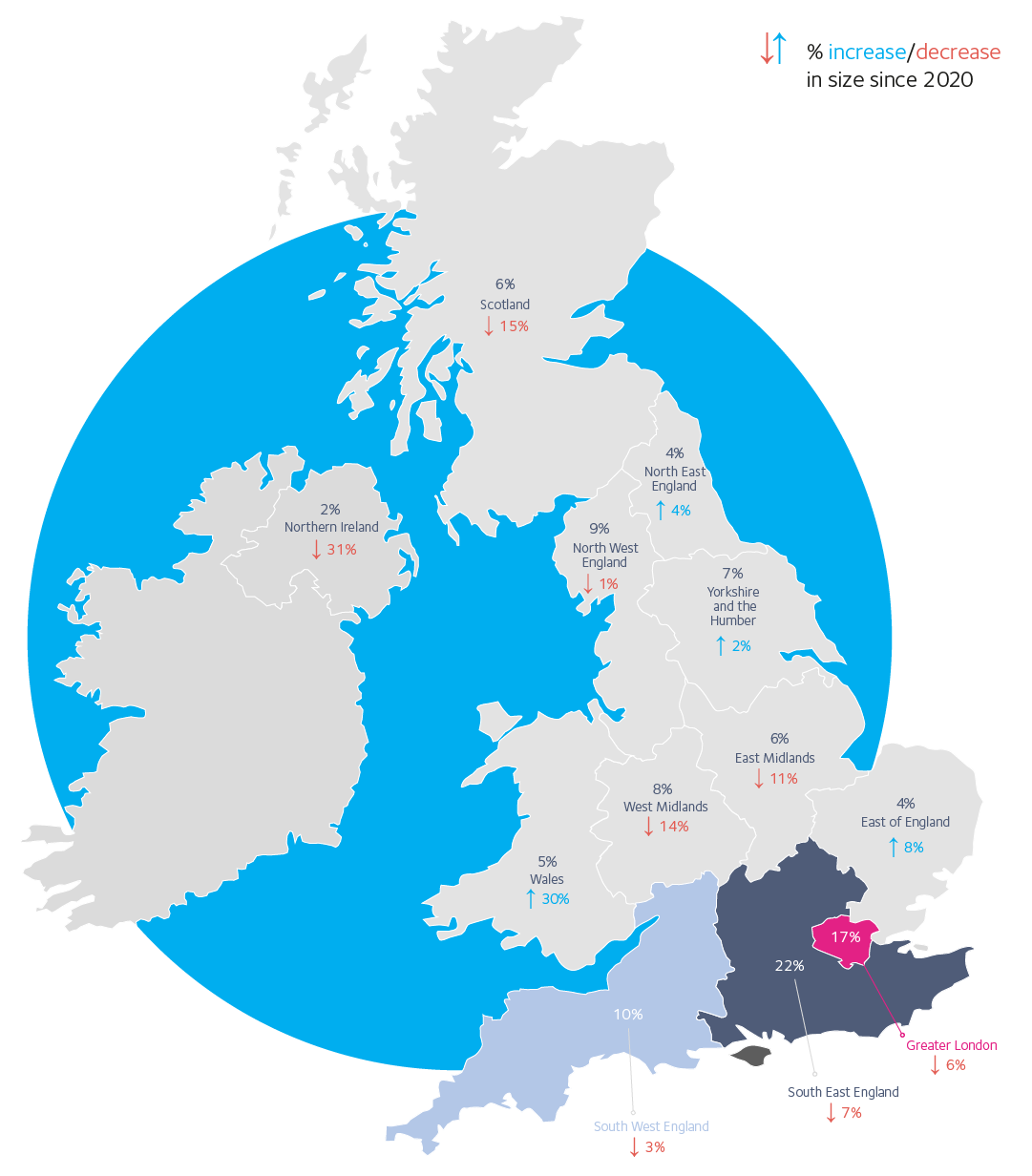 Despite the number of solo self-employed workers claiming benefits decreasing by five per cent between 2020 and 2021, universal credit claimants have increased by 15 per cent, with an additional 33,000 individuals now using universal credit. The 15 per cent increase in those claiming Universal Credit is particularly concerning given that this follows a 341 per cent increase experienced between 2019 and 2020.