IPSE’s Confidence Index for Q3 2020 showed that although freelancers’ quarterly earnings have recovered by ten per cent since their all-time low last quarter, they remain at the second-lowest level on record: £17,305. This is because, as a result of the pandemic, freelancers’ spare capacity is the second-highest on record at 5 weeks: i.e. the average freelancer spent 5 weeks without work this quarter. Freelancers’ average quarterly earnings have only increased at all because this is a slight improvement on 5.5 weeks without work last quarter and their average day rate has risen slightly from £416 to £428. Overall, freelancers’ quarterly earnings are still flagging at what now seems worryingly like a new normal.

Freelancers’ confidence in their businesses, too, seems to be held down at a consistent low. In the first quarter of 2020, freelancers’ business confidence for the next three months dropped to the record low of -62.6, then rose back to -20.4, perhaps reflecting the announcement of support measures for some of the self-employed. This quarter, their confidence remains at the second lowest on record at -22.2. There is a similar story, too, when it comes to 12-month business confidence, which dipped to -57.3 in Q1 then rose to -30.5 in Q2 and remained there this quarter.

This flagging business confidence is concerning because, while freelancers’ confidence in the economy has always tracked political and economic changes closely, their confidence in their businesses has generally been bullish in the face of adversity. The pandemic appears to have changed this.

There is also no doubt that the pandemic is to blame for freelancers’ reduced confidence in the performance of their businesses. When asked about the factors having the most significant negative impact on their businesses, freelancers in the top two Standard Occupational Classifications (SOC1 and SOC2) said the coronavirus pandemic was the top factor. The only group that placed the pandemic second was SOC3, which narrowly picked the state of the economy as the top factor (and the poor state of the economy is largely also a result of the pandemic). 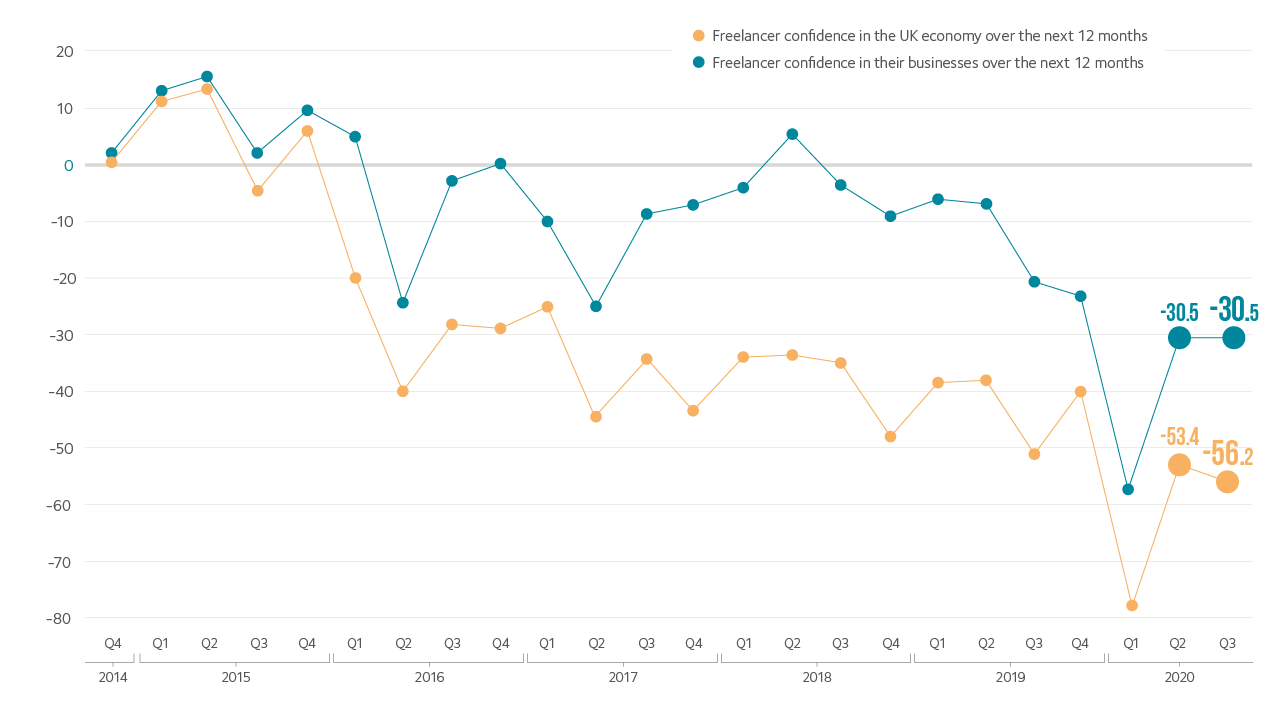 There is a similar story for freelancers’ confidence in the economy over the next 12 months. This dropped to -77.8 in Q1 of this year, then rose to -53.4 in Q2 and fell again slightly to -56.2 in Q3. Overall, it dropped slightly less than 3-month confidence but also recovered significantly less, suggesting that although freelancers have been somewhat buoyed by the government’s support and stimulus packages, they fear the long-term economic damage caused by the pandemic.

Overall, we have a picture of a sector that has been hit hard by the first wave of the pandemic and is in a shaky and fragile position as we enter the second. While earnings and confidence both stabilised somewhat after the unseen lows of the first wave, both appear to have settled at a much lower level than before the pandemic. Given the tremors in freelancers’ economic confidence, however, there are signs the second wave could lead earnings and confidence to tumble from this plateau once more.

The Cost of COVID: How the pandemic is affecting the self-employed

How freelancers respond to an uncertain economy: A longitudinal report on seven years of IPSE FCI data